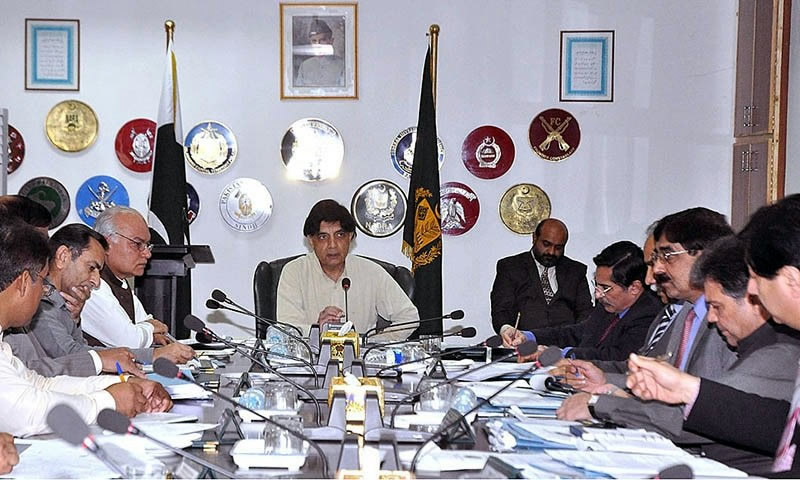 Interior Minister Chaudhry Nisar Ali Khan directed officials of the Federal Investigation Agency (FIA) on Thursday to speedily proceed with major corruption cases and go after big fish and warned of disbanding the agency if it failed to deliver.

During a meeting with FIA officials, he said he did not want them to do the bidding of the ruling party and himself “but to become a symbol of justice for people and of terror for big thieves”.

He regretted that no progress had been made in investigations into major corruption cases for quite some time and nobody was ready to lay hands on bigwigs who had plundered billions of rupees. “I will not let the investigations into corruption cases to be sidelined or slowed down,” he said. The minister sought a report about 64 FIA officials declared corrupt by an inquiry conducted by the agency itself and regretted that some of them were still holding key positions. He said he wanted to purge the FIA of corrupt elements and did not want to see the corrupt officials continuing to work with the agency. The minister was not satisfied with a response by an FIA official that 16 of the 64 officials brought in the agency on deputation had been sent back to their parent departments and most of the others had been sidelined. He said the cases of the officials reinstated by judicial orders would be pursued in courts with the help of the material which formed the basis for their classification as corrupt. He lamented that inquiry reports were changed without bringing the matter to his knowledge, go-slow policy was adopted and files went missing. He said officials who failed to perform should quit and join some other department.

Chaudhry Nisar cited the example of multi-billion rupee Employees Old Age Benefit Institute scam in which poor people were deprived of their hard-earned money. The accused officials are being released on bail one by one and the FIA is failing to build any roadblock. He referred to another scam in which people convicted in foreign countries of drug peddling, murder and other serious crimes were brought to Pakistan under the exchange of criminals’ agreement and set at liberty. “It has turned into a money-minting business,” he said. He said two FIA officials had gone to Thailand without the ministry’s permission to bring a Burmese drug smuggler here by declaring that he was a Pakistani national.

The man named Ibrahim Koko had been sentenced to 37 years in prison in Thailand but was brought to Pakistan after a Pakistani passport was issued to him on the basis of fake domicile. He vowed to take appropriate action on the matter. Many characters involved in the scam had been arrested, he said adding that a case had been registered against some officials of Pakistani embassy in Bangkok. He urged the Ministry of Foreign Affairs to act against the officials involved in the matter.

About a scam involving the Trade Development Authority of Pakistan, the minister was informed that it was not one case but one of 72 cases with 110 accused. An amount of Rs2.35 billion has been recovered so far and several accused have obtained pre-arrest or post-arrest bail. He was also briefed on an oil scam in which changes had been made into an agreement for oil supply to allow import of substandard oil. The original agreement envisaged that the shipper was responsible to ensure quality of oil. The minister was told that one ship carrying substandard oil had arrived in the country four days ago. He was also informed about other scams including one related to Hajj and another about purchase of a Boeing plane for the PIA, in which former defence minister Chaudhry Ahmad Mukhtar was the principal accused. Chaudhry Nisar was surprised to know that the FIA had 11,500 cases pending in different courts and decided to strengthen the legal wing of the agency.