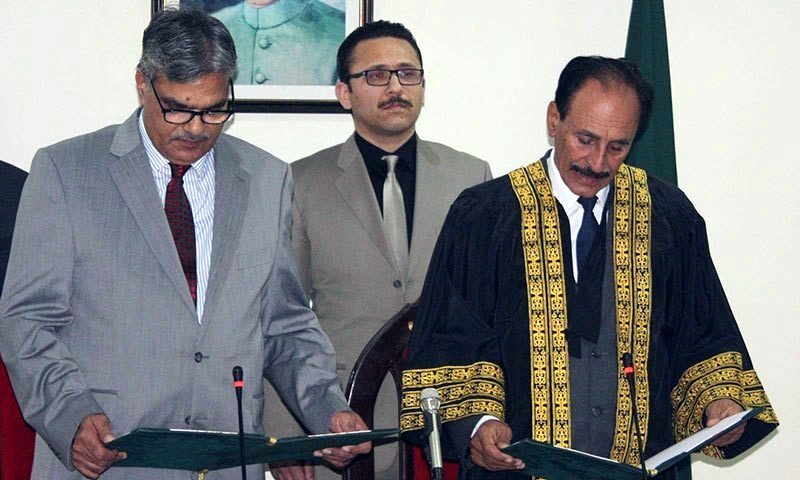 The appointment of Chaudhry Muhammad Barjis Tahir, a PML-N loyalist, as governor of Gilgit-Baltistan set off a political storm in the region after he took oath of his office on Monday, but the incumbent refused to step down and claimed that he was still the ‘constitutional’ holder of the position.

“I have not resigned as yet since the federal government has not informed me about my removal,” Pir Karam Ali Shah said. “It is unconstitutional and unethical to appoint a new governor without officially removing the sitting one.” Minutes after Barjis Tahir, Federal Minister for Kashmir Affairs and Gilgit-Baltistan, took oath of his office, protests erupted across the region and in Islamabad against the appointment of a man from outside the area as governor. The protests forced a change in venue of the oath-taking ceremony from Gilgit-Baltistan House to the Ministry of Kashmir Affairs. According to sources, the ministry was told that parties opposed to the PML-N planned to hold demonstrations outside the GB House if the ceremony went ahead. The oath-taking went ahead nevertheless, but without fanfare and under heavy security cover in a small room at the ministry. The narrowness of the room led to an exchange of harsh words between the authorities and journalists. The latter ultimately decided to boycott the event. But the newly appointed governor apologised to journalists and persuaded them to end the boycott.

KARAM BREATHES FIRE: Pir Karam Ali Shah accused Islamabad of hatching a conspiracy to undermine the powers vested in the GB government under the GB Empowerment and Self-Governance Order 2009. “I will take my case to people’s court as the federal government is trying to negate the sacrifices rendered by GB populace for joining Pakis­tan. In 1947 the GB rulers had an option to proclaim accession even to countries like China and Russia,” Mr Shah said upon his return to Gilgit from Karachi. He was in the city for medical treatment. “Our forefathers sided with Pakistan only for the sake of Islamic values, but now we are being humiliated for no fault of ours.” Workers of the Peoples Party took to the streets in Gilgit, Skardu and Danyor in protest against the centre’s move. The demonstrators carried banners slamming the federal government for “imposing an outsider on our region”. Speakers warned the federal government that the region could turn into “another Balochistan” if it did not respect the people’s aspirations. “We will never tolerate the imposition of a non-local and PML-N favourite as governor,” Hussain Ali Rana, an office-bearer of Gilgit-Baltistan PPP, said. He expressed apprehensions that elections to the region’s council would not be “free fair under the circumstances”.

TAHIR TAKES OATH: According to a statement released by the Ministry of Kashmir Affairs and Gilgit-Baltistan, federal minister Chaudhry Muhammad Barjis Tahir took oath as fourth governor of GB since introduction of the Empowerment and Self-Governance Order in 2009. Acting chief judge, Supreme Appellate Court, Justice Raja Jalaluddin administered the oath. Caretaker chief Minister Sher Jahan Mir, Speaker of Gilgit-Baltistan Legislative Assembly Wazir Baig and Chief Secretary Sultan Sikandar Raja were among those who attended the ceremony. Amir Wasim in Islamabad adds: The Peoples Party has submitted an adjournment motion to the Senate secretariat seeking a debate on the controversial appointment of a federal minister as governor of Gilgit-Baltistan. Farhatullah Khan Babar, the mover, termed Barjis Tahir’s appointment a “sudden, mysterious and inexplicable rollback of the GB Empowerment Order”. According to the PPP senator, the president issued the notification for the appointment “on a public holiday” ( Saturday Feb 14). “The sudden, mysterious and inexplicable rollback of GB Empowerment Order 2009, the subsequent appointment within hours of a non-GB resident as the governor amounts to a grave assault on the autonomy of the region and a public declaration of no-confidence in over two million men and women of the region,” says the motion, a copy of which is available with Dawn.

“This provocative assault on the autonomy of the region and affront to its people has grim forebodings for the political and social stability of GB and calls for an urgent debate by suspending the normal proceedings of the House,” the motion says. Talking to the media, Senator Farhatullah Babar said a feeling was rife among the people of GB that they had been cheated for the past six decades. He criticised the federal government for extending the law on military courts to GB by overriding the region’s Council. “The government sidestepped the council because it knew that the body will oppose establishment of military courts,” Mr Babar said. He brushed aside the government’s contention that a referral to the council was not needed because the issue was related to defence. “If the 21st Amendment can be extended to GB, why not extend the benefits of 18th Amendment to it and allow it to have membership in the Council of Common Interests (CII) and share in the NFC Award as well,” he retorted. Moreover, the senator recalled, a sub-committee of the Senate’s human rights committee was already working on a report for massive reforms in GB.

Farhatullah Babar said the expansion of the region’s cabinet from three to 12 members and the appointment of a federal minister as governor had raised serious questions about the fairness of the coming polls. The Pakistan Tehreek-i-Insaf (PTI) also expressed suspicions the federal government was all set to rig the GB elections. In a statement, the party described the appointment of governor, the chief election commissioner and expansion in the caretaker cabinet as “pre-poll rigging”. The PTI has challenged the appointment of chief election commissioner for GB in the Supreme Court. The GB Council is a 33-seat unicameral legislative body that was formed after promulgation of the GB Empowerment and Self-Governance Order by the PPP-led government. The order grants the region self-rule and an elected legislative assembly. Before the 2009 order, the region had been directly ruled from Islamabad.