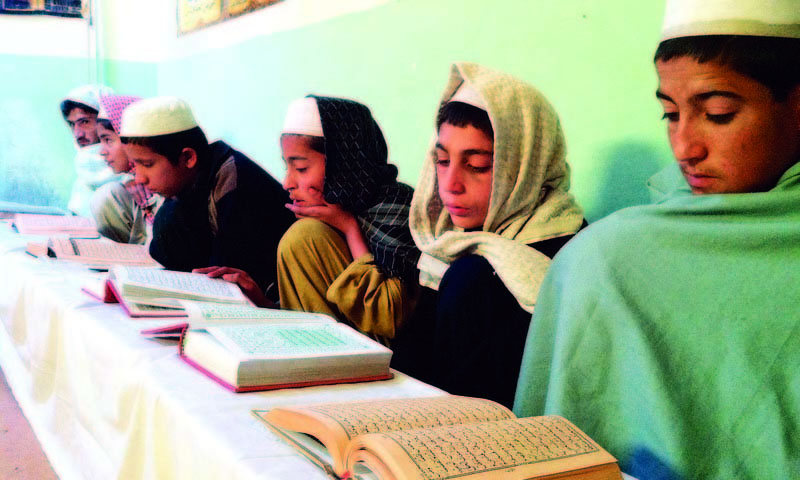 A meeting convened on Tuesday to review the implementation of the National Action Plan against terrorism and extremism was confronted by the mammoth challenge of checking the funding of seminaries that is mainly channelled through unconventional means.

Chaired by Prime Minister Nawaz Sharif, the meeting held discussion on ways and means to put in place an effective mechanism for the monitoring of foreign financing for madressahs, which is said to come primarily from Middle Eastern countries, an official present at the meeting told Dawn. Firstly, the meeting was told, there was need to take brotherly Muslim countries such as Saudi Arabia, Iran and the UAE, into confidence on NAP and its stated objectives. This is essential because according to government’s own agencies, these countries are the primary financiers of seminaries in Pakistan. The meeting resolved to meet ambassadors of these countries and obtain their input on how they could choke the unregulated transfer of money to religious schools, particularly those that have established links with proscribed organisations.

One of the suggestions floated during the huddle to keep a check on sources of funding was making annual audit of madressahs mandatory under the supervision of government agencies. “We can make seminaries statutorily responsible to declare all sources of funding, but it will require a major exercise to bring religio-political parties on board over this plan,” a participant of the meeting was quoted as saying. Besides working on administrative and legislative measures to control the financing of madressahs, the government must launch a media campaign to educate the public on how they should donate money only to those seminaries which had a clean slate. However, the Ittehad-i-Tanzeemat-i-Madaris (ITM), which claims to have around 25,000 madressahs running under five different wafaqs representing different sects, does not seem happy with the government’s latest initiative.

Talking to Dawn, ITM General Secretary Mufti Muneebur Rehman criticised the government for “unnecessarily” raising the issue of seminary financing. Asked if the ITM would cooperate with the government in the implementation of NAP, Mr Rehman quipped: “How can a government which itself is surviving on foreign funding check others doing the same.” However, in the same breath, he clarified that none of their seminaries received funding directly from abroad, and said “we regularly have audits by registered chartered firms”. Abdul Qudoos, spokesperson for the Wafaqul Madaris Al-Arabia — the umbrella body for seminaries of the Deobandi school of thought with about 18,000 seminaries working under it — explained that their main source of funding was donations from locals, insisting that they disapproved of foreign donations as a policy. Mr Qudoos accepted that a considerable amount of money came from overseas Pakistanis, but “as far as foreign governments are concerned, we absolutely don’t receive any assistance from them”.

Echoing the ITM general secretary’s concerns, Mr Qudoos also asked the government to come clean on its proposed policy for madressah regulation and categorically pinpoint seminaries which had connections with other countries. The issue of funding for seminaries has long been in discussion, but successive governments have failed to put a workable solution in place. A former government official who had worked on similar lines told Dawn that the main issue was that of political will, which past governments seemed to lack. Talking about the present government, he said: “In recent memory, Interior Minister Chaudhry Nisar Ali Khan unveiled a historic internal security policy, but within months it was consigned to the dustbin. One can only wish that this time it’s serious about the NAP”. He also pointed out there were multiple ways of receiving funds from abroad, but what the government could do was to find out how much money a madressah spends and then verify its source of funds.

US Designates Mullah Fazlullah as a ‘Global Terrorist’

US Designates Mullah Fazlullah as a 'Global Terrorist'