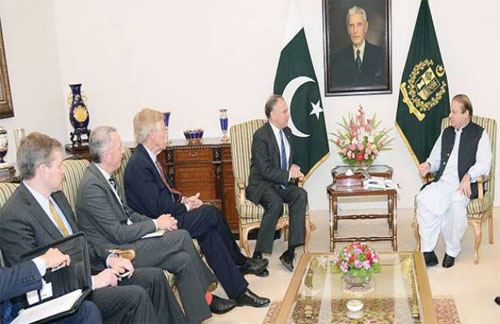 Against the backdrop of ceasefire violations by Indian security forces along the Line of Control and the Working Boundary,

Prime Minister Nawaz Sharif has said that United Nations resolutions must form the basis for any solution to the Kashmir dispute and the people of Kashmir must be made part of it.

Talking to US Senators Tim Kaine, Member of the Senate Armed Services Committee, and Angus King, Member of the Senate Armed Services Committee, who called on him here at Prime Minister’s House on Monday, the premier stressed the need for implementing UN resolutions and hoped that the UN would honour its own resolutions on this matter.  He said, “The only acceptable solution of Kashmir will be the one which is endorsed by all parties including Pakistan and Kashmiris.”  Talking about Pakistan-India ties, he said both the countries could only gain through dialogue. He expressed his disappointment on the cancellation of foreign secretary level talks. The prime minister appreciated US support on Bhasha and Dasu dams. He informed the US senators that Pakistan had seen improvement in its economic indicators and asked for better market access for Pakistani products in the US. He said enhancing mutual trade was Pakistan’s priority area in bilateral relationships.

Adviser to the Prime Minister on National Security and Foreign Affairs Sartaj Aziz, Foreign Secretary and Secretary to PM Javed Aslam also held a meeting with the US senators.  Meanwhile, briefing ambassadors of the permanent members of the UN Security Council on Monday about the situation prevailing on the Line of Control and the Working Boundary, Sartaj Aziz expressed Pakistan’s deep concern over the ceasefire violation by New Delhi.  The adviser outlined prime minister’s vision of a peaceful South Asian region and his positive overtures to the Indian government since coming to power in May 2013, including reaching out to Prime Minister Modi.  He expressed his disappointment at the fact that first the foreign secretary-level talks scheduled for 25th August were cancelled, and later,[contentblock id=2 img=adsense.png]

India resorted to unprovoked firing and shelling on the LoC and the Working Boundary resulting in many civilian casualties, injuries and extensive damage to property. He expressed his concern that the ceasefire violations by India and the provocative statements by her leadership were not only a setback to peace efforts but also a distraction from Pakistan’s counter-terrorism commitments in the ongoing Operation Zarb-e-Azb. The adviser informed the P-5 ambassadors about his letter to the United Nations Secretary General in which he had called upon the UN to play its due role towards defusing the prevailing situation, and monitoring of the ceasefire violations by the UNMOGIP, which possessed both the mandate and the infrastructure to play its important role. He also called upon the P-5 countries to urge India to respect the ceasefire agreement and engage in a meaningful and serious dialogue. US Senators Tim Kaine and Angus King called on the Sartaj Aziz at the Ministry of Foreign Affairs on Monday.

A number of issues including Pakistan’s relations with the US and the regional situation were discussed in the meeting. The adviser highlighted the steps taken by the government for Pakistan’s economic revival and good governance. He underscored the government’s approach of seeking peace in the neighbourhood and expressed his concern at the current security situation along the Line of Control.

According to Foreign Office, the Senators appreciated Pakistan’s efforts to curb terrorism and acknowledged the sacrifices made by Pakistan in this regard. They agreed that the root causes of terrorism must also be addressed for a longer-term solution of the problem. -nation