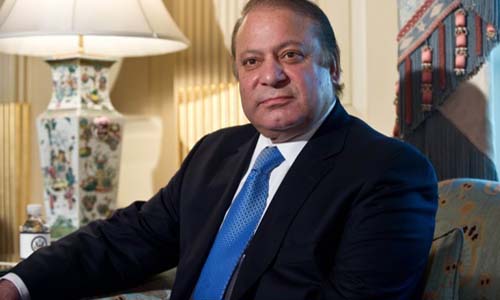 A petitioner seeking disqualification of Prime Minister Nawaz Sharif was puzzled when the Supreme Court asked him on Thursday if he would be willing to produce Chief of the Army Staff General Raheel Sharif as his witness to help the court reach a right conclusion.

“The crucial point in the controversy at hand is a closed door meeting between the prime minister and the army chief,” observed Justice Dost Mohammad Khan, a member of a three-judge bench headed by Justice Jawwad S. Khawaja.

The bench had taken up three identical petitions moved by PTI leader Ishaq Khakwani, PML-Q chief Chaudhry Shujaat Hussain and Advocate Gohar Nawaz Sindhu requesting the court to order disqualification of the prime minister for allegedly falsely stating in a joint session of parliament on Aug 29 that the government had not asked the army to mediate and become a guarantor between the government and the Pakistan Tehreek-i-Insaf and Pakistan Awami Tehreek to end the current political impasse. On Thursday, the court only heard Gohar Sindhu, representing the vice president of PTI lawyers’ wing.

Justice Dost Mohammad said it would be very difficult for the court to decide the matter unless some tangible evidence was brought before it. And the primary evidence in the case, he added, was the witness or at least the affidavit of the army chief because he was the only person who could confirm or deny the version on which the petitioner was agitating, especially when the prime minister himself was the respondent in the case and whose disqualification was being sought. He said the court had to do justice by applying the Constitution, adding that the crucial point in this case was the closed door meeting between the prime minister and the army chief.

Advocate Sindhu pointed out that a military spokesperson stated that it was the government which had asked the army chief to mediate between the government and the protesting parties. But Justice Dost Khan said that prime facie the joint sitting of parliament reposed complete confidence in the prime minister. If the prime minister had to be disqualified for telling a lie because he was not sagacious and ameen then what would be the fate of other members of the National Assembly and Senate who reposed confidence in him, he asked. Advocate Sindhu then referred to Article 227 of the Constitution which ensures that all laws should be brought in conformity with the Quran and Sunnah and requires that members should be honest and not tell lies.

“If we strictly follow Articles 62 and 63 of the Constitution which deal with pre- and post-election qualification of the members then the entire parliament will stand disqualified because the Islamic injunctions require abolishment of ‘Riba’ (interest), but we draw salary as other government servants and parliamentarians do under the interest-based financial system,” Justice Dost Khan observed. The counsel said the court should not be afraid of taking any extreme step even if heavens fall. Justice Mushir Alam asked the petitioner to consider the fetters the Constitution had placed protecting the members under Article 63(p) and said a member could not be disenfranchised unless he was convicted by a competent court of law.

He also asked if there was any law which attracted disqualification of a member if the same had been rejected by the National Assembly speaker. “What remedy you have after the speaker’s refusal to disqualify a member,” Justice Alam asked. The court adjourned the proceedings with an observation that it had to determine maintainability of the petition and the procedure to be adopted in case the court decided that it had the jurisdiction to hear the matter. The court asked the petitioner to consider filing an amended petition because all his references derived from the provisions before the 18th Amendment. The case will be taken up on Oct 16. -dawn

How Stress Affects Your Heart