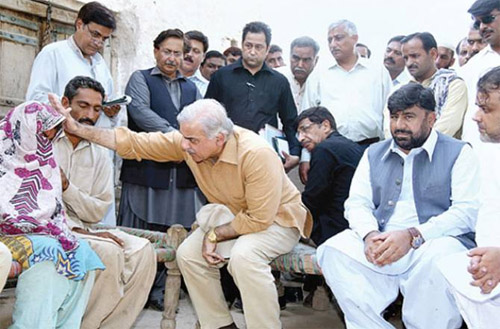 Addressing the meeting, the Chief Minister said the flood inflicted serious damage, killing more than 200 people and affecting hundreds of families and ruing thousands of acres from the central parts of the province to its southern side.

However, he added that his government timely response rescued a number of lives. He said Punjab ministers, public reps, servicemen, babus and other officials played their part in this need of hour. Shahbaz Sharif said that his team served the humanity without any political consideration. He said that just as rescue and relief operation was conducted with efficiency and dedication, the process of rehabilitation will also have to be undertaken with the same spirit.  The Chief Minister said that a foolproof digital system has been evolved for the provision of financial assistance to the flood-hit people and the model of 2010 is being replicated for providing compensation to the flood affectees of 2014. He said that under the transparent system of payment, no deserving person will be deprived of his right to financial assistance.

He said that provincial ministers have been delegated responsibility of monitoring the process of payment of financial help and they will reach their concerned districts on September 27.   Shahbaz said that he, provincial ministers and elected representatives will celebrate Eidul Azha with the calamity-hit people. He said that provincial ministers, assembly members and administration should display the same spirit for providing the right to the deserving flood affectees as was shown by them during rescue and relief operation.  He said that resources are a trust of the nation and it is responsibility of the government to spend every penny of public money on the distressed people in a transparent manner. [contentblock id=2 img=adsense.png]

He said that district monitoring committees have been set up for the provision of financial assistance while committees have also been established for addressing complaints in this regard.  The Chief Minister said that all out facilities will be provided to the affectees at the special centers for the payment of  compensation. He said that in view of arrival of winter season, 25 thousand quilts are being arranged for the flood affectees. He said that half of the financial assistance is being paid by the federal government while the rest of the amount is being given by Punjab government. He said that federal government has also extended full cooperation in the rescue and relief operation for which he is thankful to Prime Minister Nawaz Sharif and the federal government. Shahbaz Sharif further said that sit-in in Islamabad caused an irreparable damage to national economy and the future generations will also suffer this loss.

He said that due to negative politics of sit-ins the visit of Chinese President has been postponed.  He said that foundation-stone of a number of development projects including energy projects was to be laid besides several agreements were to be signed during the visit. He said that President of Pakistan, Prime Minister, Ministers and he had himself paid visits to China and made tireless efforts for finalizing these projects which have been jeopardized by politics of sit-ins.  The Chief Minister further said that only those nations progress in the world which boldly face difficult circumstances and change their destiny through hard work and commitment.

He thanked all those people who have served the distressed flood-hit people in the time of need and hoped that they will continue to work with the same spirit and dedication.  He especially appreciated the services of Provincial Minister Iqbal Channer and said that he had made commendable efforts for the relief and assistance of calamity-hit people. Shahbaz Sharif directed that a vigorous awareness campaign should be launched regarding the process of provision of financial assistance and announcements should be made at mosques, schools, hospitals, health centers and public places while pamphlets should also be distributed in this regard. -nation