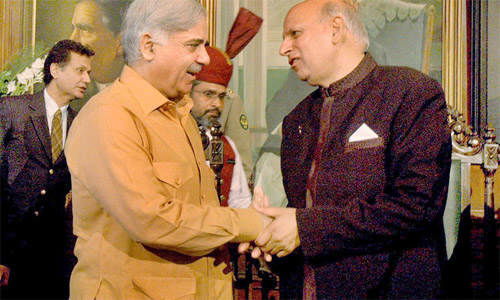 Punjab Governor Chaudhry Mohammad Sarwar has quashed rumours that he has developed differences with Sharif brothers over governance issues and that he is planning to resign.

“I am not resigning. There is no truth in reports that I am going to resign on my return from London,” Mr Sarwar told Dawn on phone from London. He is scheduled to return on Wednesday.

After the governor raised governance issues in Punjab in an interview with a private TV channel, rumours started doing the rounds that because of differences with the Sharifs he might quit. It may be mentioned that Pakistan Tahreek-i-Insaf chairman Imran Khan in a speech congratulated the governor for ‘speaking truth’. “In the interview I had not said something which was against someone. Whatever happening in the country every citizen is in distress, including myself. Everyone is concerned about the state of education, health and justice. [contentblock id=2 img=adsense.png]

You see might is right rule everywhere. I am not a conventional politician. I speak the truth without considering political dispensation,” he said. The governor also said that this was a difficult time for the government. “Even if I have differences with the Sharifs I will not leave them at the point where they need me most,” he said, adding that at times “I am critical of Nawaz Sharif and Shahbaz Sharif on different issues, but I am critical of myself as well”. To strengthen democracy good governance is inevitable.

Mr Sarwar had gone to the UK primarily for generating funds for flood-affected people. “All politicians, including Imran Khan should get united for the country. This is not the time of politics,” he said.

The governor regretted the statement of PTI’s disgruntled leader Javed Hashmi that he (Sarwar) was present at a meeting between Imran Khan and Dr Tahirul Qadri. “I always had a respect for Javed Hashmi but his allegation has hurt me,” he said. -dawn

Hashmi to Contest by-Polls as Independent