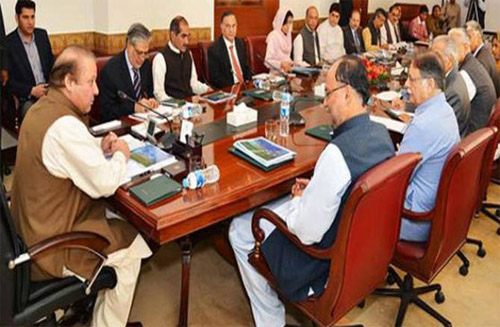 A federal cabinet meeting, chaired by Prime Minister Nawaz Sharif on Monday, decided to adopt a mechanism for adjustment of inflated electricity bills for the last month,

lift ban on recruitments in government departments and give legal cover to the minimum wage of Rs 12,000 per month. Addressing a joint press conference along with Minister of State for Water and Power Abid Sher Ali after the cabinet meeting,

Federal Information and Broadcasting Minister Senator Pervaiz Rashid said Prime Minister Nawaz Sharif had assigned Adviser to the Ministry of Water and Power Dr Musaddiq the responsibility to probe complaints of excessive electricity billing for the last month. The adviser presented his report to the cabinet on Monday, the minister said. The cabinet decided that excessive money charged from consumers who consumed up to 200 units, but received higher bills as compared to those in the same month of the last year, would be adjusted in the next bill. The decision appeared to be taken against the backdrop of severe protests against excessive billing throughout the country. Overbilling in respect of the consumers who used over 200 units would also be adjusted after verification if there was five percent increase in their bills for the month as compared to the same month last year.

Briefing media persons on the cabinet decisions, the information minister said recruitments against vacancies in government departments would be made purely on merit in a highly transparent manner. For this purpose, the prime minister has constituted a cabinet committee to oversee the entire process, he added. The ban on recruitments was imposed to discourage the past practice which ignored merit and jobs were distributed on the basis of personal likings and party affiliations, he added. The minister emphatically stated that recruitments would be made on merit, without considering political affiliations. A transparent process of recruitment of thousands of educators was adopted by the PML-N government in the Punjab and the same transparency would be introduced at the Centre, he asserted. [contentblock id=2 img=adsense.png]

While talking about the relief package for the flood affectees, the minister said the government would give Rs 25,000 per family before Eidul Azha. The amount would be allocated at the rate of 50 percent by the provincial and the federal governments, he pointed out. This principle was followed during the 2010 floods and there was no complaint that any family was missed. He said the federal government would also compensate the losses of crops and assist in reconstruction of partially or fully damaged houses. Talking about the decision on minimum wages, the minister said there had been complaints about the implementation; for that matter it has been decided to give legal cover to the minimum wage of Rs 12,000 per month. State Minister for Water and Power Abid Sher Ali, addressing the press conference, admitted that wrong bills were issued to consumers, so his department was working to rectify them. “We have received a large number of complaints of overbilling this month and are convinced that overbilling has taken place, so Prime Minister Nawaz Sharif has ordered a probe into the issue,” Abid Sher Ali said.

Three reputable companies would perform an audit regarding the over-billing, Abid said. He, however, passed the buck on his staff and the previous governments.  “Overbilling was not possible without the involvement of the department officials,” he said and added the issue had arisen during the previous governments’ eras. The state minister for water and power also said though thousands of cases of electricity theft had been unearthed, punishment had been awarded only to three power thieves. This press conference took place at a time when people are holding rallies and protests throughout the country and burning their electricity bills. Last week, Pakistan Tehreek-e-Insaf Chief Imran Khan who has been holding a sit-in against the PML-N government since August 14 in the federal capital burnt his electricity bill, stating that he was not ready to pay for the electricity theft. Experts believe the state minister’s press conference was an attempt to mitigate the growing public anger.

There is, however, hardly anything the Nawaz government can do to lessen the prevailing electricity crisis due to the system’s constraints. “There are two types of complaints; excessive bills are issued to consumers without meter reading and the amount of electricity bills is relatively higher, for example, if someone was receiving a bill of Rs 1,500 for 201 units in the previous months, now he is receiving a bill of Rs 2,200 for the same 201 units. The first category comes under the domain of overbilling while the second one is due to expensive electricity generation through petrol or diesel,” explained an official of the Ministry of Water and Power. He disclosed that during July-August when hydel generation was low due to the scarcity of water, they had no option but to use expensive means like petrol and diesel to generate electricity so that public could observe their religious obligations during the holy month of Ramazan.

“Due to the higher expenses, the electricity generation cost rose and it was reflected in the bills,” he said, adding this can only be stopped by shifting to gas from petrol and diesel, but despite repeated requests, the Ministry of Petroleum and Natural Resources had not supplied the required amount of gas to the energy sector. The official termed the state minister’s statement regarding involvement of staff in overbilling a political statement. He, however, admitted that electricity theft was one of the reasons for the inflated bills. “The staff has nothing to do with overbilling; if a meter is not read, it is for lack of staff. There has been a ban on appointments and now when the ban has been lifted, we will recruit meter readers and meters will be read properly.

However, it is true that higher electricity theft rate is another reason behind the excessive bills,” he said, adding power theft must be stopped as the distribution companies have to pay for the electricity they receive and if electricity is stolen, they divide this stolen amount among other consumers. He affirmed that consumers would continue to receive excessive bills until and unless electricity is generated through cheaper means or more subsidies are given by the government. Pakistan’s energy crisis has persisted for a long time. Experts believe power generation through water is the only cheap and viable source of electricity generation for a country like Pakistan. They are of the view that in addition to construction of new dams, whole power distribution and generation system must be revamped to control electricity shortage. -nation