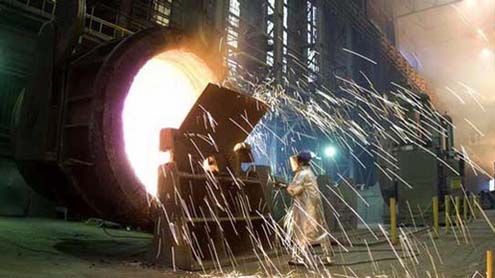 ISLAMABAD: The government on Thursday ordered the payment of a part of salaries to the staff of Pakistan Steel Mills but refrained from pledging any major financial support for its turnaround, considering it ‘too risky’.

A meeting of the Economic Coordination Committee of the cabinet presided over by Finance Minister Ishaq Dar discussed the Steel Mills’ affairs for almost an hour but could not find a way to revive the country’s largest industrial complex or keep it running in a ‘respectable’ way.

Therefore, it requested Privatisation Commission chairman Zubair Umar and ministry of industries to work together to prepare a proposal for the PSM’s sell-off because all the five options put forth by the secretary industries involved huge capital injection from the budget without any guarantee that it would yield any positive result.

It was noted that salaries had not been paid to the PSM employees since October 2013 and decided that 45 days of salaries would be paid to them forthwith.

In early August, Mr Dar had said that a solution to the PSM’s problems would be worked out within a week. However, he could not take time out of his busy schedule to consider the five options presented by the secretary industries for almost five months as the bleeding entity lost another Rs15 billion.

A brief presented reportedly by Shah Saad Hussain, a PSM director, showed that any financial commitment at this stage could be a risky option. In his view, a technical audit of the machinery and plants was in order to verify claims that the PSM could work at 82 per cent of its capacity.

The audit would not only determine the status of machinery but also suggest if the aged plants would be attractive to any potential investor.

It appeared, however, from the discussion that all the liabilities estimated at Rs125-200bn, including overstaffing, would be parked in a special entity to be looked after by the government through the federal budget so as to make the assets, properties and machinery a saleable enterprise.

An official statement quoted Mr Dar as giving a categorical assurance that the interest of workers shall be protected in any future arrangement and at all costs, adding “the case of the revival of Pakistan Steel Mills is a serious issue”.

Meanwhile, the ECC approved a summary moved by the defence ministry to provide sovereign guarantee of $26.8 million to M/s China Electronics and Technology Corporation (CETC), Beijing, to pay back loan in seven years, including a two-year grace period. The guarantee was being provided in line with a decision made between National Engineering and Scientific Commission of Pakistan and CETC for `Establishment of National Electronic Complex of Pakistan’.

The meeting also approved a proposal of the ministry of water and power to amend the gas pricing agreement with Liberty Power Project at Daharki in Sindh province. The Qadirpur Gas Price for sale to Liberty Power Plant Ltd would now be fixed equal to 67.50pc of the weighted average of a basket of crude oil import during the six months’ period which shall be notified on six-monthly basis as per the mechanism prevalent for fixation of wellhead gas price of other fields. The approval is aimed at removing discrimination towards Liberty Power. The ECC approved the Standardised Security Agreements (Project Agreements) for upfront tariff regime based on wind energy projects under Policy for Development of Renewable Energy for Power Generation 2006 following Nepra’s Upfront Tariff Determination.

The Alternative Energy Development Board was also authorised to approve any project-specific amendments in the Standardised Security Agreement provided it do not increase government’s financial and contingent liability beyond those stipulated in the original agreements.-dawn