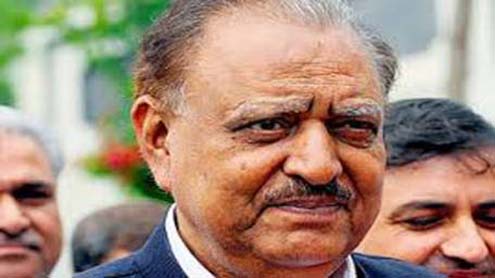 ISLAMABAD: President Mamnoon Hussain on Tuesday called for further expansion of bilateral ties between Pakistan and Saudi Arabia in various fields with particular focus on trade and investment, infrastructure, dams and energy sectors.

He said the government of Pakistan was keen to further deepen the strategic partnership and bilateral cooperation in diverse fields to the mutual benefit of the people of the two countries. He also mentioned scope for increased cooperation in agriculture and livestock sectors.
The meeting also covered Pakistan-Saudi Arabia bilateral relations and matters of mutual interest, a statement from the Presidency said.

Discussing bilateral ties, the president said the two countries enjoy fraternal relations that were deep-rooted in common faith, traditions and commonality of views on all issues of mutual interest.
The president appreciated and thanked King Abdullah bin Abdul Aziz and the Saudi government for the generous assistance extended to the government and people of Pakistan in every hour of need and testing times.

The people of Pakistan highly revere Khadim Al-Harmain Al-Sharifain King Abdullah bin Abdul Aziz and hold him in high esteem, the president said.
While noting the presence of large 1.5 million Pakistani diaspora in Saudi Arabia, he said they serve as a living bridge of friendship between the two countries and form yet another strong bond between the two peoples.

He expressed confidence that Pakistani expatriates were positively contributing in the development of the two countries and hoped that this bridge would continue to expand and strengthen to the mutual benefit of two brotherly countries.

The president also lauded the gesture of Saudi government for extending the grace period to the expatriate workers, including Pakistanis, for correcting their resident and labour status in accordance with the new labour laws of the kingdom.

“There is need to start a new era of strategic relationship between our two fraternal countries in order to further broaden and deepen the existing cordial bilateral relations,” the prime minister said in his meeting with the Saudi foreign minister.

Both the leaders discussed issues of bilateral and regional importance.
The prime minister said Pakistan and Saudi Arabia need to enhance bilateral trade to reflect the strong fraternal bonds that exist between them by holding regular meetings between the commerce ministers to explore ways of enhancing bilateral trade.

About the energy situation in Pakistan, the prime minister said Pakistan would welcome investment by the kingdom in energy sector and also in other sectors like infrastructure, agriculture and livestock.

Nawaz Sharif stressed that his government wishes to enhance economic and business ties with Saudi Arabia and is ready to grant privileges to the Saudi businessmen.

On the Afghan situation, the prime minister reaffirmed that Pakistan remained committed to facilitating Afghan-led and Afghan-owned peace and reconciliation process, adding that a peaceful and stable Afghanistan was in Pakistan’s interest.

He said Pakistan supports all efforts aimed at strengthening unity among the Islamic countries.
The prime minister also thanked the Saudi government for extending help to Pakistani workers who were affected by the recent labour laws enacted in the kingdom.

He said that the large Pakistani community in Saudi Arabia is a human bridge between the two brotherly countries and would continue to play a vital role in the development of Saudi Arabia. He added that the skilled manpower can meet the future human resource needs of Saudi Arabia.- dailytimes