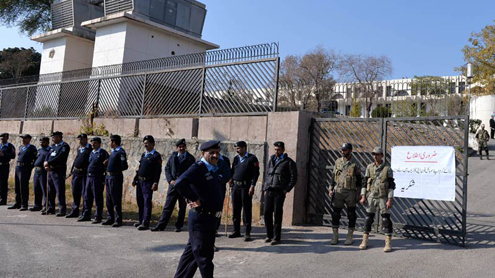 ISLAMABAD: The special court, headed by Justice Faisal Arab, on Tuesday resumed the hearing of the treason case against Gen (retd) Pervez Musharraf.

Addressing the court constituted for the treason trial of the ex-army strongman, Musharraf’s lawyers said they did not have their client’s medical certificate.

Moreover, no one had appeared today from the Armed Forces Institute of Cardiology (AFIC) where Musharraf was rushed to on Jan 2 after he complained of heart problems on way to the special court.

Earlier on Monday, the court had directed the Armed Forces Institute of Cardiology (AFIC) to produce on Tuesday (today) a medical certificate on Musharraf’s health condition. The court had given the order after Musharraf did not attend Monday’s hearing.

During today’s proceedings, Musharraf’s counsel Anwar Mansoor said the special court had a limited mandate, adding that he did not view Akram Shaikh as the chief prosecutor in this case. Mansoor moreover apologised to the court on account of the arguments that took place during Monday’s proceedings.

Meanwhile, the Anti-Terrorist Court (ATC) in Islamabad demanding Musharraf’s medical certificate exempted him from appearing today in the 2007 case relating to the killing of Lal Masjid cleric Ghazi Abdul Rasheed.

During the hearing, Musharraf’s lawyer filed a plea on his client’s behalf to be granted exemption from appearing before the court today. The lawyer of the 70-year-old former military strongman said his client was unwell and therefore could not appear in court.

Subsequently, the ATC granted the request for today’s exemption and asked for Musharraf’s medical certificate. The court later adjourned the hearing of the case to Jan 18.

The Lal Masjid operation, ordered by Musharraf, was a 2007 government crackdown on the controversial pro-Taliban mosque in Islamabad, which ended in a bloody eight-day siege killing at least 58 Pakistani troops and seminary students. -Dawm

Is Western Democratic System Cause or Solution for Predatory Societies