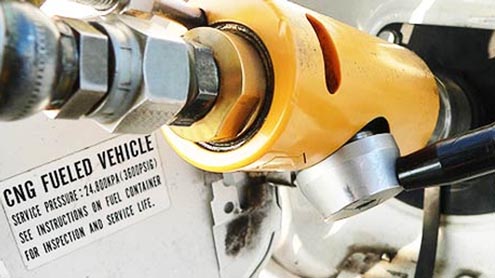 ISLAMABAD: The CNG may not be available at all to motorists in Punjab and may remain in short supply in other provinces, but its prices have been reduced all over the country.

According to a notification issued by the Oil and Gas Regulatory Authority on Tuesday, the reduction in prices became necessary after the Supreme Court declared a nine per cent additional general sales tax on compressed natural gas as illegal.

Prices were reduced by Rs1.23 to Rs74.25 per kilogram for Khyber Pakhtunkhwa, Potohar and Balochistan and by 61 paisa to Rs66.14 per kg for Punjab and Sindh.

The gas supply to CNG stations in Punjab has already been stopped for two months and for Sindh two days a week. The CNG stations in Khyber Pakhtunkhwa may remain closed for one day a week, most likely from next week. The situation in Balochistan – there are only two CNG stations in Quetta – will remain unchanged.

The new rates come into effect immediately. The government was charging 26pc GST on the sale of CNG instead of 17pc.

The Supreme Court ruled last week that additional 9pc GST should be withdrawn forthwith and the amount so collected by the government since announcement of the budget in June be deposited in the court because the levy was violative of the constitution. -Dawn