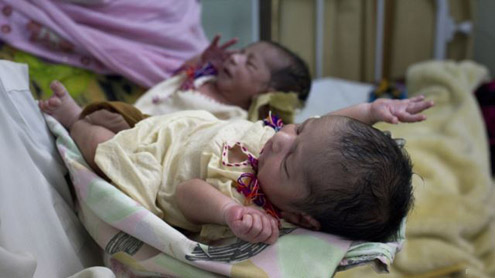 A Pakistani doctor won a $1 million grant on Tuesday to fight early child mortality in a small fishing village in southern Pakistan in a contest financed by an American entrepreneur to find innovative ways to save lives, The Caplow Children’s Prize said.

A proposal by Anita Zaidi, who heads the pediatrics department at the Aga Khan University in the port city of Karachi, beat out more than 550 other applications from more than 70 countries. The prize was founded and funded by entrepreneur Ted Caplow to find impactful and cost-effective ways to save children’s lives, according to a press release announcing the results. Zaidi said in a telephone interview that her project will focus on reducing child mortality rates in Rehri Goth, on the outskirts of Karachi.

According to Zaidi, 106 out of 1,000 children born in the town die before the age of five. That is almost double the worldwide under-five child mortality rate of 51 deaths per 1,000 live births in 2011, according to UNICEF. Few of the women in the area of roughly 40,000 people have access to medical care during pregnancy or money to pay for things like multivitamins, said Zaidi. There is no nearby hospital, and women usually give birth accompanied by a birthing attendant with little or no formal training. When women do run into complications giving birth, the babies often die while the women seek medical care, the doctor said.

The money will be used in Rehri Goth to eliminate malnutrition among expectant and new mothers and their babies, ensure that children have access to primary health care and immunizations and train a group of local women at Aga Khan University to become midwives. Women taking part in the program would get two medical checkups to monitor their pregnancy, multivitamins to promote a healthy fetus and food if they are malnourished, she said. Zaidi has been working in the area for the last ten years on various health-related research projects carried out by the university so she was familiar with its needs.

“I know this community. I know what its problems are,” Zaidi said. “It’s a really good match between what the community needed and what this prize was offering.” Caplow said Zaidi “really gave reassurance that she would be able to do exactly what she said she would do and it would have the impact that she said it would have.” He added that he and his wife conceived of the prize after they gave birth to triplets who spent a month in an intensive care unit. The prize, which Caplow said would continue next year, was a way to address the disparities in medical technology available around the world. -Yahoo