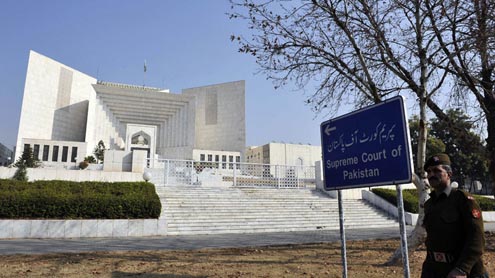 The Supreme Court on Tuesday ruled that prisoners undergoing trial under the Frontier Crime Regulation (FCR) should be provided with adequate medical care and that they should be permitted to meet with their family members.

The ruling read out by Justice Gulzar Ahmed was issued on a miscellaneous petition filed by Advocate Tariq Asad regarding the 11 Adiyala prisoners who had gone missing in 2010. Asad was representing the detainees.

The Supreme Court had been hearing the case relating to these prisoners since 2010 and had reserved its ruling on Dec 3. The case had begun over the disappearance of 11 prisoners who had mysteriously gone missing from outside Rawalpindi’s Adiyala jail on May 29, 2010 — the day they were acquitted of terrorism charges for their alleged involvement in the audacious Oct 2009 attacks on the GHQ and ISI’s Hamza Camp Rawalpindi.

Four of them later died in unexplained circumstances. Abdus Saboor, 29, died on Jan 20, 2012, Mohammad Amir on Aug 15, 2011 and Tehseenullah and Said Arab respectively on Dec 17 and Dec 18, 2011. The seven surviving prisoners were then detained in an internment centre set up under the Action in Aid of Civil Power Regulations 2011. They were later handed over to the political administration in the Federally Administered Tribal Areas (Fata) for trial under the Frontier Crime Regulation 1901.