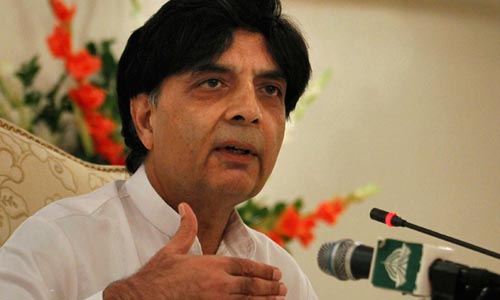 Interior Minister Chaudhry Nisar Ali Khan invited on Sunday parliamentary leaders of all political parties in the National Assembly to a meeting for resolving the controversy over the alleged rigging in the May 11 elections.

In a letter sent to leaders of parliamentary parties, the interior minister also sought to clarify the government’s position on the sacking of Nadra chairman Tariq Malik, claiming that this had nothing to do with the issue of alleged poll rigging or verification of thumb impression of voters.

“I am taking this opportunity to ask you to give your considered opinion for the future course in this regard in a manner which is not prejudicial to the sanctity of the entire electoral process or the democratic institutions which appears to be the sole purpose behind this entire debate,” he said. “I am more than willing to organize a meeting of all the parliamentary leaders of political parties represented in the National Assembly, for reaching a consensus in this behalf.”

The government suffered humiliation last week when the Islamabad High Court suspended its abrupt sacking of the National Database and Registration Authority chairman.

All opposition parties condemned the government’s action and alleged that the sacking was linked to verification of voters’ thumb impression, especially in Punjab, the PML-N’s stronghold.

The government, through a notification, had removed the Nadra chairman without citing any reason and appointed a senior official of the authority, retired Brig Zahid Hussain, as acting chairman.

In his letter, the minister informed leaders of political parties that “due to the reported non-use of magnetic ink on the ballot papers, digital verification and validation may not be possible and a large majority in each constituency will fail the verification process”.

He regretted that “in the recent days and months the issue of verification of thumb impression on ballot papers has resonated in media, public debates, judicial hearings and even the parliament”.

The entire debate, Chaudhry Nisar said, had initially revolved around the possibility of verification of ballots through a digital process applied by Nadra. “However, it had been contended that the same may not be possible because the magnetic ink for thumb impression was not used in the general elections.”

Terming the removal of the Nadra chairman “a routine administration change”, he said that “an impression has consciously been created as if the change is linked to the issue of verification of ballots which is erroneous, mala fide and patently misleading”.

“In case the relevant authorities failed to procure the magnetic ink in time what action was initiated by the previous government or the Election Commission which was overseeing the entire process?” he asked in the letter. “Who was responsible for start of this public debate on the issue and what was the motive behind this act?”

Chaudhry Nisar informed the parliamentary leaders that it was originally contended that Nadra required a few billion rupees to procure the equipment for the verification process, but “subsequently verification process was started without procurement of the said equipment”.

The minister said: “I would like to reiterate that Nadra is not a one-man organization.

It comprises men and women of high caliber and honesty whose hard work and commitment have made Nadra the organization it is today. Somebody’s inclination or love for an individual should not be allowed to cloud this reality through a media trial and turn this very important issue into a political circus.”

Despite all this, he said, his government had no objection to the verification process under the supervision of any institution or authority, not only in four or 40 constituencies but in every single constituency.

“We are also prepared to hand over the supervision of this entire exercise to retired Justice Wajihuddin Ahmed of the Pakistan Tehreek-i-Insaf for absolute transparency,” he said. -Dawn