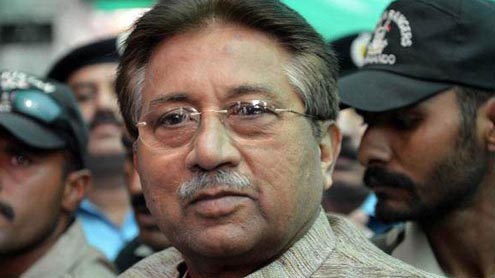 In a formal complaint to be filed on Monday in a three-judge special court set up to try the former military ruler under Article-6 (1) of the Constitution, the government has not nominated any co-accused in the case.

In the ‘high treason’ case against former president retired Gen Pervez Musharraf, the government plans to charge him with abrogating, subverting, suspending, holding in abeyance and attempting to conspire against the 1973 Constitution by declaring emergency and overthrowing superior judiciary in November 2007. This is despite the fact that clause 2 of Article 6 also holds “any person aiding or abetting or collaborating the acts mentioned in clause (1) shall likewise be guilty of high treason”.

The complaint, a copy of which is available with Dawn, does not blame Gen Musharraf for the 1999 military coup.

Informed sources said the complaint No 01/2013 would be submitted to special court’s registrar Abdul Ghani Soomro, Sessions Judge of Sindh Judicial Service, through the FIA director general and the interior secretary. It will be filed under Article 6 of the 1973 Constitution, read with Section 5 of the Criminal Law Amendment (Special Court) Act 1976, read with Section 3 of the High Treason (Punishment) Act, 1973.

The interior secretary will act as the complainant and authorise the FIA DG to file the complaint.

The special court headed by Justice Faisal Arab of the Sindh High Court and comprising Justice Tahira Safdar of the Balochistan High Court and Justice Yawar Ali of Lahore High Court has been constituted by Chief Justice of Pakistan Iftikhar Muhammad Chaudhry at the request of the government under the Criminal Law Amendment (Special Court) Act 1976.

The complaint says that under Section 3(1), read with serial number 14 of the Schedule of the FIA Act 1974 (Act VIII of 1975), the FIA is designated/authorised to prosecute the offences punishable under the high treason act. It pleads that the accused be tried on five heads of charges as mentioned in Article 6 and, if found guilty of any or all the charges, be awarded punishment as mentioned in Section 2(b) of the High Treason (punishment) Act 1973 (Act LXVIII of 1973).

Under Section 2(b) of the High Treason Act 1973, a person found guilty of high treason “shall be punishable with death or imprisonment for life”, the complaint reads. Mr Musharraf who ruled the country for 10 years has been accused of committing all the five acts of high treason — he abrogated, subverted, suspended and held the constitution in abeyance or attempted or conspired to do so.

The complaint says that on the same day (Nov 3, 2007) the accused vide notification 2-9/2007-Min-1(A) also issued the Provisional Constitution Order 1 of 2007 which in express letter and spirit abrogated, subverted and suspended Parts II, III, IV, VII, XI and XII of the Constitution. This is the second act of high treason.

The same day the accused, as self-styled president of Pakistan, issued “Oath of Office (Judges) Order, 2007” to declare that a person who immediately before the issuance of the said order held office as a judge of the Supreme Court, Federal Shariat Court or a high court shall cease to hold office with immediate effect. “This order grossly abrogated and subverted the letter and spirit of Parts I and VIII of the Constitution, and hence the third act of high treason.”

The accused who had ‘occupied’ the high office of president in June 2001 had on Nov 14, 2007, issued the “Provisional Constitution (Amendment) Order 2007” to further amend the PCO-1 and hence also abrogated, subverted and suspended the letter and spirit of various provisions of the Constitution, including Parts I and XI, and hence committed the fourth act of high treason.

A month later, on Dec 14, 2007, the accused issued “Constitution (Second Amendment) Order 2007 (President Order No 6 of 2007) to further amend Articles 41, 44, 193, 194, 208 and 270-C of the Constitution. The amendment “revealed the real intention and motive for abrogating, subverting and suspending the Parts III, VII, XI and XII of the Constitution to remove the constitutional bars in Articles 44 and 63 against his inadmissible third term in uniform during pendency of his case in the Supreme Court”. This is the fifth act of high treason. The complaint says that all the five counts of offences were intentionally committed by the accused with the sole objective of “perpetuating his illegal occupation of the highest office, warding off any possible adverse verdict which could disrupt his continuous usurpation of power and thwarting the sub-judice case as already conclusively determined and held by the apex court in its judgement PLD 2009 SC 879 in the Sindh High Court Bar versus the federation of Pakistan”.

In view of the above grounds, “the complainant seeks trial, conviction and punishment of accused Pervez Musharraf for all five separate offences of high treason” as envisaged in Article 6 of the Constitution of Pakistan, 1973, read with Section 2 of the High Treason (Punishment) Act (Act LXVIII of 1973. -Dawn