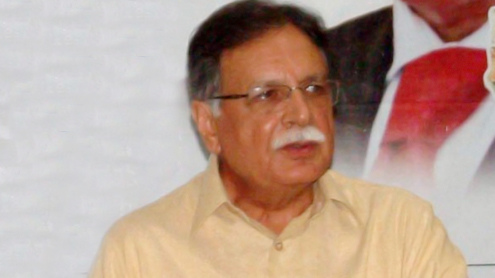 Minister for Information and Broadcasting Senator Pervaiz Rashid Sunday said there should be no politicking on foreign policy and the Pakistan Tehrik-e-Insaaf (PTI) should rise above its party politics.

Talking to Dunya News on its fifth anniversary celebrations, he said the PTI was pursuing a dual policy regarding the United States and North Atlantic Treaty Organization (NATO). The stance taken by the PTI leaders while abroad was different from that they adopted here in public, he said and added that such hypocrisy was not in the national interest as it gave the world a message that Pakistanis were a confused nation. He advised the PTI leaders to avoid hypocricy in the larger national interest.

He said halting and searching of NATO containers by the PTI workers in Khyber Pakhtunkhwa could not be termed a correct action. The PTI leadership had failed to guide and rein in its workers, he said and added non-state actors could not be allowed to run the state affairs. He said the main leadership of PTI, including its chairman, was absent in the sit-ins against drone strikes. Even in the first information report (FIR)against the drone attacks, the PTI had not nominated any particular person as accused, he added.

He said urban planning projects continued in the KP with the help of United States Agency for International Development (USAID) and dollars were flowing in the province. Referring to the recent problem at a stage in PTI public gathering, where its chief Imran Khan was also present, he said how could a party, which could not properly manage a public rally stage, effectively pursue foreign policy. He said there should be no muscle flexing on national issues and instead negotiations should be preferred for their resolution.

Responding to a question, he said the government did not want confrontation with any country as it was not in Pakistan’s interest.  “We want cordial relations with Afghanistan and other neighbouring countries,” he added. He urged the regional countries to join hands for alleviating poverty, hunger, undernourishment, and unemployment. About the missing persons, he said the Pakistan Muslim League-Nawaz (PML-N) had been pursuing their case. The Supreme Court wanted the missing persons back at home and the PML-N government also desired the same.

Answering another question, Pervaiz Rashid said ‘Tahaffuz-e-Pakistan Ordinance’ would be got approved from Parliament with consensus of  opposition. He said a smooth democratic system was functional in the country.  The elected government was making appointments at key posts according to the book, he added. Lauding the services of Chief Justice Iftikhar Muhammad Chaudhry, he said the CJP had played a vital role in strengthening democracy in the country.

To a question, he said the prices of potatoes, tomatoes and other vegetables were declining. Earlier, the Information Minister visited the offices of Dunya News here. He took round of various departments and inquired about their functioning. Bureau chief Arshad Sharif told the minister that 112 people were working in various departments. Later, the minister cut the cake marking the channel’s fifth anniversary. -App