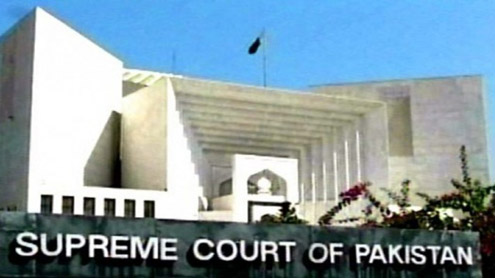 The Supreme Court directed the federal authorities on Wednesday to devise a mechanism to beat the menace of duty evasion on imported goods and smuggling of arms and drugs “with zero tolerance” for sustainable peace in Karachi.

The court rejected a report submitted by the Customs authorities on duty collection and directed the chairman of the Federal Board of Revenue to appear in court to explain the measures taken in this regard. The bench, headed by Chief Justice Iftikhar Muhammad Chaudhry and comprising Justices Jawwad S. Khawaja, Mian Saqib Nisar, Amir Hani Muslim and Ejaz Afzal Khan, was seized with the implementation proceedings of the Karachi suo motu judgment case.

The court was utterly disappointed and dissatisfied with three different reports filed by the customs authorities, one of them on behalf of the FBR chief, and termed them “eyewash”. Justice Chaudhry observed that the black money generated through duty evasion and smuggling of weapons and drugs was used in criminal activities not only in Karachi but also across the country. The judges asked the customs officials whether black money generated by evading taxes and levies was being controlled at Karachi Port and Port Qasim.

The court observed that the customs authorities had failed to satisfy it “by making a statement that 100 per cent recovery of taxes is being made and there is no evasion”. The bench directed the FBR chief to put up a concise statement showing daily clearance of goods separately from ports along with a complete record, manifest correspondence, a clearance of the customs department with a certificate that there was no evasion, particularly of goods which were cleared on Wednesday. The court ordered the customs authorities to deliver copies of their reports/statements in the offices of Attorney General Munir A. Malik.

The attorney general, along with Sindh Advocate General Khalid Javed, would go through them and give their opinion in respect of transparency in making evaluationn and recovery of taxes. The judges also inquired of the customs authorities about the flow of arms and ammunition into the country through vessels or launches. They directed the FBR chief and the director general of the Pakistan Coast Guards to place on record documents to show the process of smuggling. The customs officials conceded that the department was unable to recover 100pc duty. They also referred to a customs intelligence report and said that there were dens of smuggled arms and ammunition in the Sohrab Goth area.

Smuggled weapons were stored in certain residential projects, including Al Asif Square. However, he said, customs alone was unable to clean the area. “Tax evasion and illegal weapons and drugs have brought the country to the brink of destruction,” the chief justice observed, directing the customs to ensure eradication of smuggling and duty evasion. The bench issued notices to chairmen of the Pakistan Telecommunication Authority and the Frequency Allocation Board, along with six cellular companies, for issuing unauthorised SIMs and SIMs of other countries, including Afghanistan. The court observed that illegal arms and SIM cards were key elements in creating a law and order situation.

It was informed that activated SIM cards of Afghan companies were being sold and operated in the country for use in anti-social activities. The attorney general informed the bench that he had taken up the matter of Afghan SIMs with higher authorities. He said there existed a roaming agreement between two companies, by which a local company provided roaming facility to the company of a foreign country. He said the PTA and any local company could not block the SIM cards of foreign companies, including those of Afghanistan.

The bench issued a notice to Ramzan Bhatti, who was appointed as head of one-man commission to make findings on duty evasion and weapons and drug smuggling, to appear in court to explain why he incorporated into his findings observations which had found mention in a report submitted by the Federal Tax Ombudsman. Earlier, at the outset the advocate general submitted a performance and progress report regarding targeted operations conducted by police and Rangers. Expressing satisfaction over the performance of law-enforcement agencies, the court expressed apprehension that achievement made by them might not sustain if those arrested were not put on trial. The hearing was adjourned to Thursday.  -Dawn