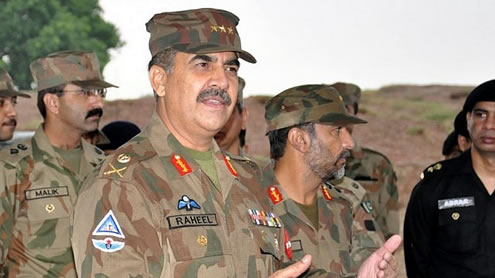 The change of command comes with the country facing a daunting array of challenges – a homegrown Taliban insurgency that has claimed thousands of lives, vexed relations with India and the winding-down of the 12-year NATO mission in neighbouring Afghanistan.

Sharif, whose elder brother won Pakistan’s highest military award for valour in the 1971 war with India, will formally take command on Thursday. A message from the office of Prime Minister Nawaz Sharif confirmed Raheel had been made COAS and Rashad had been made CJCSC.

Nawaz met Raheel and Rashad at separate meetings earlier today. Both meetings lasted for about half an hour. Raheel was working as the Principal Staff Officer (PSO) to General Ashfaq Parvez Kayani as well as the Inspector General Training and Evaluation (IGT&E).

Raheel is the younger brother of late Major Shabbir Sharif who was awarded a Nishan-i-Haider. Rashad was working as the PSO to Kayani as well as the Chief of General Staff (CGS). Departing commander Kayani has served as army chief since 2007 and has been given much credit for resisting the temptation to meddle overtly in politics.

When he confirmed his retirement last month he stressed that the armed forces “fully support and want to strengthen” democracy. Kayani will be stepping down on November 29 after six years. He had proposed the names of Rashad as his successor and Lieutenant General Haroon Aslam as CJCSC.