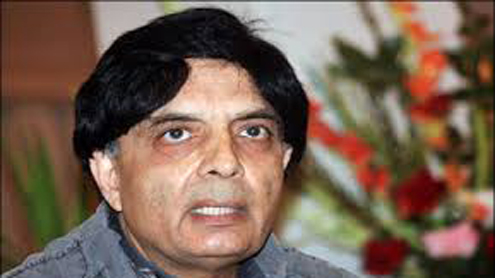 The ruling and allied opposition senators exchanged harsh words on Wednesday over the submission of an “unsatisfactory” reply by Interior Minister Chaudhry Nisar Ali Khan to a question about terrorist attacks.

The opposition members walked out of the House against the interior minister. The pandemonium began when ANP’s Senator Zahid Khan rejected the figure given by the interior minister on fatalities in terrorist attacks in Khyber Pakhtun khwa from June this year until now. Interior Minister Nisar Ali Khan told the House that a total 136 terrorist incidents occurred in Khyber Pakhtun khwa in which 120 people were killed. The minister claimed that these figures were provided by the provinces, as law and order is a provincial subject. The arguments and counter-arguments between Zahid Khan and Nisar Ali Khan continued, prompting all opposition senators to stand up. Maula Bakhsh Chandio of the PPP asked the interior minister to “behave democratically and not act like a school headmaster”.

Senator Raza Rabbani said such things will not be allowed in the Upper House of parliament. He and the interior minister had an exchange of harsh words. In the meantime, leader of the House Raja Zafarul Haq said the opposition was always in search of an opportunity to raise hue and cry in the Senate. He said it is the right of the opposition members to protest and criticise the government but the attitude of the opposition members towards the chair as well as the minister was totally inappropriate.

Nisar told the House that he had received these figures from the provinces and will re-check them if someone had any objection to them. After the verbal clash, the opposition senators walked out from the Senate against what they said was rude behavi our of the interior minister. After the walk-out, Senate chairman asked the ruling party’s senators and ministers to bring back the opposition members but no minister or PML-N senator obliged. Regretting the posture of the opposition‚ Minister for Information and Broadcasting Pervaiz Rashid said it is the prerogative of the opposition to criticise the government and point out its mistakes.

However‚ it is also its responsibility to demonstrate patience instead of resorting to inappropriate attitude. He recalled that the PML-N had played the role of a responsible opposition in the previous government while adopting a strict stance on issues‚ “but we never acted in bad manners”. JUI-F’s Senator Haji Ghulam Ali said the senators had adopted a tough behavi our with former interior minister Rehman Malik but he always behaved politely. When none of the senators/ministers showed readiness to bring back the opposition senators, the proceedings of the House were suspended for 15 minutes. After a long break, the House brought back the opposition senators.

Opposition leader Senator Aitzaz Ahmad said they had come back on the condition that the interior minister would take back his answer. “This condition should be met then we will sit in the House,” he said, adding that the minister should create a sense of tolerance and take the opposition questions positively. Aitzaz claimed that the interior minister had also misbehaved with veteran politician Raza Rabbani. Meanwhile, Raja Zafarul Haq said that Nisar had already said that the question will be re-visited and presented in the House again. Senate Chairman Nayyer Hussain Bokhari said the arguments revealed that the issue was still not resolved, therefore, the House will be adjourned until Thursday (today). At the same time, the opposition members again announced a walk-out. -Dailytimes