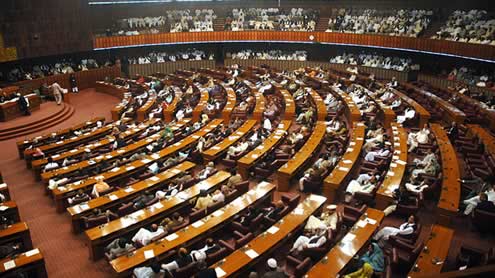 The assembly, meeting for the first time after presidential election, will remain in session for two weeks and will be mainly speaking on the presidential address of Asif Ali Zardari, delivered on the inaugural session. However, there are strong indications that legislators across the lines would be speaking less on presidential election and more on other issues confronting the nation presently.

Sources in opposition parties told media that a strategy of the parties for the coming session would be finalised in their parliamentary parties meeting. However, there is likelihood that they would be up in the arms against what they believed the fast deteriorating situation in the country. The mode of the protest would be determined in the parliamentary parties meeting. “Either it would be boycott of the proceedings or about creating the rumpus in the House,” sources said.

Opposition parties would be coming hard on the government over terrorism in the country, especially during the month of Ramazan. The indecisiveness of the government on giving a clear-cut policy against terrorism would particularly come under discussion, said a PPP legislator.

The failure of government to convene the All Parties Conference would be another point that may trigger strong protest from opposition parties. High inflation and unprecedented hike in the electricity tariff would be pinching the treasury hard in the session as opposition is planning to raise the issue strongly. On the other hand, the government is prepared to get the constitution of standing committees of National Assembly passed during the next session.