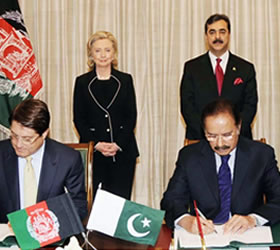 Pakistan and Afghanistan have reached an understanding on all major issues relating to the Afghan Pakistan Transit Trade to conclude the process of negotiations in this regard. It has been agreed that no Indian export to Afghanistan will be allowed through Wahga. However, Afghanistan would have the opportunity to export to India. Reciprocally, Pakistan would be able to export its goods to Central Asia through Afghanistan.
The broad based record note was signed on 18th July,2010 at the Prime Minister’s House in the presence of Prime Minister Syed Yusuf Raza Gilani and US Secretary of State Ms. Hillary Clinton states that Pakistan and Afghanistan hope that resolution of all outstanding matters relating to the finalization of Afghan Pakistan Transit Trade Agreement would help in the early signing of the Agreement, after completion of legal processes from both sides.

The Agreement thus signed would be an important milestone in the development of Pak-Afghan Trade and Economic relationship to the mutual benefit of both countries.