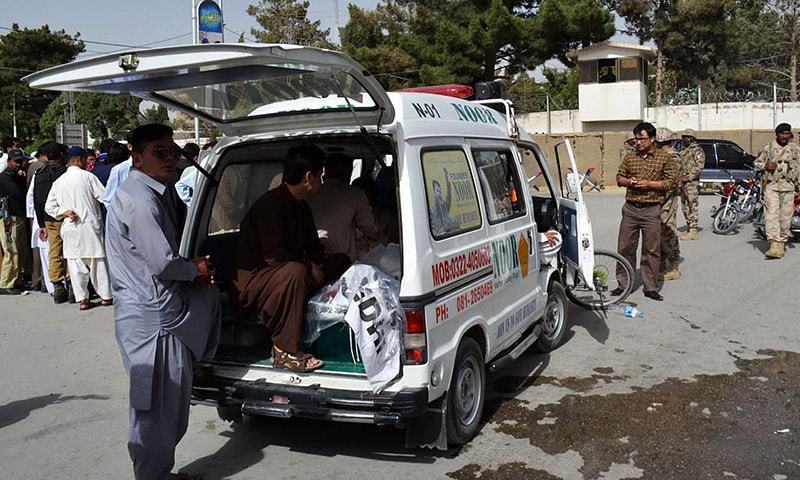 Four people, three of them belonging to the Shia Hazara community, were killed and eight others, two women among them, suffered injuries in three incidents of firing here on Monday.

Bazaars, markets, shopping centres and shops were closed and normal activities suspended in the city after the incidents. Vehicular traffic remained thin in and around the city.

People of Hazara community and traders demonstrated outside the office of the inspector general of police and Quetta Press Club to protest against the incidents. Enraged people gathered on Masjid Road and Liaquat Road, forcing shopkeepers to close their shops. The first incident occurred in Iqbal Road area where gunmen opened fire at a tea shop, killing one Anwar Ali Hazara and injuring a passerby, Mohammad Azam Yousufzai. Police took the body and the injured to the Civil Hospital. “The slain man was hit by eight bullets which caused his instant death,” hospital sources said. The incident was followed by an attack on people, women among them, waiting for a lady doctor outside the Saleem Medical Complex. The attack was carried out by two gunmen on a motorcycle. Two people died on the spot and four others were injured, police said. A heavy contingent of police and Frontier Corps personnel cordoned off the area and took the gunfire victims to the Combined Military Hospital, where doctors confirmed death of two men.

They were identified as Abdul Hakeem Hazara and Mohammad Hashim Hazara. The injured were admitted to the hospital. The third incident took place on Jinnah Road, near Kabir Building, where gunmen on motorcycles opened fire near Zehri Mosque, injuring four people. “A few bullets hit a wall of the mosque where people were offering Asr prayers,” police sources said. The injured were taken to the Civil Hospital where one of them, Mohammad Abbas Qureshi, died. “He was hit by bullets to the back while performing Wuzu (ablution) outside the mosque,” sources said. Windowpanes of the mosque and nearby shops and buildings were smashed. The people injured in the firing incidents included Mohammad Daud Hazara, Mohammad Nasarullah Hazara, Mohammad Anwar Baloch, Fatima Bibi, Qamar Bibi, Mohammad Ayaz Bhutta and Mohammad Afzal. People belonging to the Hazara community and carrying bodies of three slain people gathered outside the office of the IG.

They raised slogans against police and other law enforcement agencies. Agha Raza Mohammad, a member of the Balochistan Assembly, Syed Daud Agha and Qayyum Changezi, who were leading the demonstration, said that the government had failed to protect the Hazaras as their killing had become order of the day. The protesters dispersed after IG Mohammad Amlish Khan and CCPO of Quetta Abdul Razzaq Cheema held talks with their leaders and assured them of the killers’ arrest. Traders and other people held a demonstration outside the press club to condemn firing on Jinnah Road and unrest on Masjid Road. They called for arrest of those involved in the firing incidents. Heavy contingents of police and Frontier Corps personnel were deployed in and around the city after the incidents. FC troops and policemen were patrolling sensitive areas and security was beefed up at bazaars and government buildings.