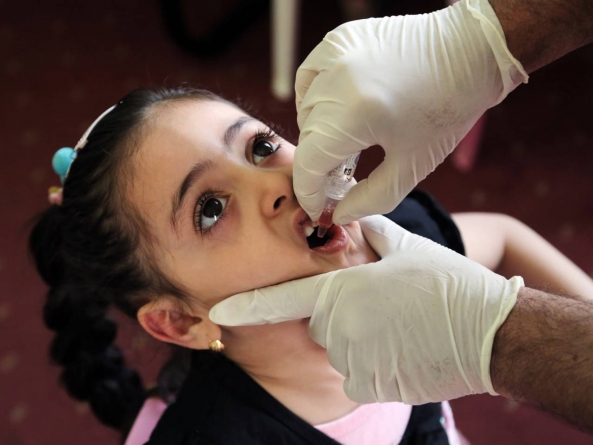 A seven-day polio vaccination campaign was launched amid tight security in Quetta after a gap of more than five weeks during which children below the age of five would be administered polio drops.

District Health Officer Quetta Dr. Sher Ahmed Satakzai told Dawn that the vaccine will be administered to 700,000 children in Quetta. The provincial government of Balochistan has declared an emergency in Quetta and other high-risk districts of the province to eradicate the paralysing disease. Teams comprising health department officials and volunteers were formed to make sure polio drops were administered to children below the age of five years in all parts of Quetta. Initially, Quetta was divided in different zones to make the campaign a success. Pakistan’s first case of polio virus for the year 2015 was reported from Balochistan’s Chagai district on Jan 1. An eighteen-month-old child fell prey to the crippling disease in Chagai’s Barabcha area near the Pak-Afghan border. During the year 2014, a total of 23 polio cases were reported from Balochistan.

Most of the cases were reported from Balochistan’s Killa Abdullah, Pishin and Quetta districts. Pakistan is one of only three countries in the world where polio remains endemic, the other two countries being Afghanistan and Nigeria, but efforts to stamp it out have been badly hit in recent years by attacks on immunisation teams The World Health Organisation (WHO) had declared that Pakistan is responsible for nearly 80 per cent of polio cases reported globally. To prevent the possible spread of the polio virus from Pakistan to other countries, the WHO imposed strict travel restrictions on the country. Militant groups often attack polio teams as they see vaccination campaigns as a cover for espionage.

There are also long running rumours about polio drops causing infertility. Anti-polio campaigns in Balochistan were suspended and rumours of WHO ending operations had emerged after deadly attack on vaccinators in Quetta in November last year which had claimed the lives of four workers. Later in December, the Balochistan government had suspended its anti-polio campaign in the province in the aftermath of attacks on polio workers in Karachi and Peshawar.