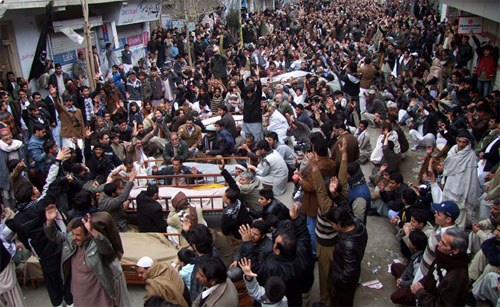 The attack on the Maulana was a result of “intelligence failure”, declared Tahir Mashhadi of the Muttahida Qaumi Movement (MQM) during a brief debate on the suicide attack on the JUI-F chief.

The discussion on the Quetta incidents began when the house met after a 20-minute break for Maghrib prayers. The members came to know about the attack on the Maulana through TV channels. Earlier in the day, some unidentified armed men had killed eight members of the Shia Hazara community in the Hazarganji area of the city. The MQM senator alleged that the law-enforcement agencies were not taking action despite fully knowing about the hideouts of the militants. The banned outfits were now openly operating in urban areas of the country, he added. “We will continue to collect bodies if operations are not carried out (against militants) in Karachi, Islamabad and Peshawar,” Mr Mashhadi said, adding that militants from the banned groups were involved in kidnappings, robberies and extortion in various cities right under the nose of law-enforcement agencies.

Veteran PPP leader Taj Haider also criticised the role of the intelligence agencies in the “war against terror”. “There are 26 intelligence agencies in the country. And most of these (agencies) had created these terrorists,” he said, adding: “This practice must end now.” The terrorists, he said, were not so strong that they could take on the “state’s organised force”. “Although there are some groups within the government and state institutions which are patronising these militants, the nation is determined to fight militancy,” Mr Haider said. PPP’s parliamentary leader Raza Rabbani said the militants did not allow the ANP, the PPP and the MQM to run their election campaigns last year. He was of the view that only those parties were being targeted which were opposed to the Taliban and which talked about “supremacy of the constitution”.[contentblock id=2 img=adsense.png]

Mr Rabbani called for a better intelligence-sharing mechanism without which, he said, the war on terror could not be won. He claimed that the forces which wanted to “destabilise” Balochistan were behind Thursday’s attacks in Quetta. Another PPP senator, Farhatullah Babar, said the attacks in Balochistan were an outcome of the government’s “unclear and flawed policy” to fight militancy. He regretted that Asmatullah Mu’awiah, from south Punjab, had recently announced that they would now turn their guns towards Afghanistan, but there was no response from the Pakistan government. He also accused the provincial government of “backing” militant groups in south Punjab. Haji Adeel of the ANP said that after targeting liberal and secular parties, the militants had now started attacking even the religious parties.

The party’s Zahid Khan criticised the Pakistan Tehreek-i-Insaf for not taking steps to curb terrorism in Khyber Pakhtunkhwa. “What else can we do when the PTI ministers are themselves paying extortion to the terrorists?” he alleged without naming anyone. He said although law and order was a provincial subject, the federal government could not absolve itself from its responsibility of sharing intelligence. “Was there no intelligence report about the attack on the JUI-F chief?” he wondered. Mr Khan regretted that politicians were not united on the issue of militancy as there were still people who had “soft corner for terrorists”. Kamil Ali Agha of the PML-Q termed the incident “alarming” and a result of the lack of intelligence-sharing mechanism. Terming the suicide attack on the Maulana an attack on the entire political leadership of the country, he said it was the third major incident in a matter of days in Balochistan.

Four labourers from Punjab had been shot dead after identification through their identity cards a few days ago, he recalled. The JUI-F minority senator Heman Das termed the attack on his party chief a result of the callousness of the provincial government which, he said, did not take appropriate security measures for such a big political gathering. Opposition leader Aitzaz Ahsan suggested that the government arrange briefings for parliamentarians on the security situation after every two or three months. Leader of the House Raja Zafarul Haq saw international conspiracy behind the attacks in Balochistan, saying that “there are some countries which do not want Pakistan to live in peace”. Mr Haq said the militants were targeting people belonging to every community – Sunnis, Shias, Christians, Sikhs and Hindus.

He said terrorism was a “national tragedy and a national challenge”. The PML-N leader regretted that despite the fact that the Pakistani nation was the biggest victim of terrorism, the international community considered the country a “producer of terrorism”. He admitted that the main burden of combating terrorism was with the intelligence agencies. Prime Minister Nawaz Sharif had already called for improving coordination among the intelligence agencies and had announced that the government would provide resources for the task, he added.

Earlier, Farhatullah Babar withdrew a controversial bill seeking to give powers to lawmakers to punish officials and people for breaching their privileges. He announced that he was withdrawing the bill because journalists had some apprehensions that the law could be used against them.