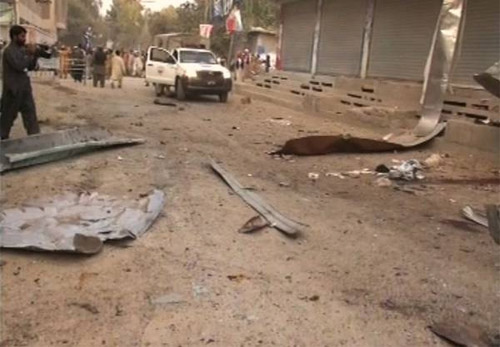 At least three people have been killed and nine injured in a blast near a JUI-F rally in Quetta.  JUI-F chief Maulana Fazulur Rehman was addressing the rally moments before the blast took place.

According to initial reports, the blast took place outside the venue of the rally on Mackengi Road. Maulana Fazlur Rehman’s vehicle was the target of the blast. “The bomb exploded near my vehicle but I am safe since my car is bomb-proof,” said Maulana Fazlr talking. “It was a suicide attack, my vehicle has been completely destroyed,” he added. JUI-F leader Maulana Amjad said the blast occurred very close to Maulana Fazlur Rahman’s car.

”It was a suicide attack,” he added.Earlier, a blast on Quetta’s Qambrani Road left two people dead and 14 others — including two personnel of Frontier Corps (FC) – injured on Thursday.Further, unidentified men also opened fire on a bus in the outskirts of Quetta on Thursday, killing eight people — said to belong to the Hazara community — and injuring one, in what is believed to be a sectarian attack. -tribune