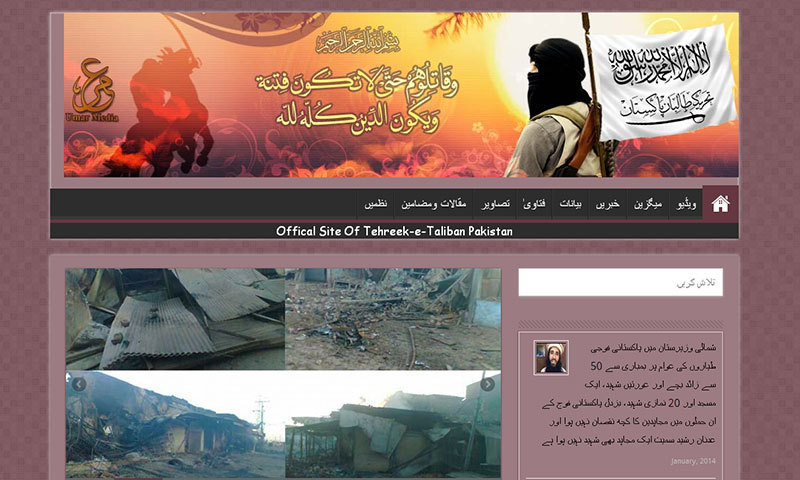 The banned Tehreek-i-Taliban Pakistan on Saturday launched its website hosting videos, a magazine, and its leaders’ interviews and statements. A news release issued by the information and publication wing of the TTP said Umar Media had sponsored the website, which would serve as the central information portal of the outfit. The TTP was declared a banned outfit in August 2008. “Statements, videos, announcements and magazine released by the TTP will be available on the website,” the release said.

It added that Umar Media was the only authorised body to issue messages and statements of the TTP. The website carries e-mail addresses of central spokesman of TTP Shahidullah Shahid and other sections. The website has been launched during peace talks between the federal government and the TTP. Recently, the government had released 19 prisoners as good well gesture to the TTP.

The website contains the TTP flag, verses from the Holy Quran, statements and videos containing sectarian, hate and propaganda material, especially against security forces, a message of TTP deputy Shaikh Khalid Haqqani for the people of Balochistan, and pictures of slain TTP chief Hakimullah Mehsud and his successor and current chief Maulvi Fazlullah.

Also posted on the website are pictures of houses allegedly bombed by the army, details of the TTP position on the current peace process and information about the recent assassination of TTP leader Asmatullah Shaheen in North Waziristan Agency. The website invites articles for posting on it for public information. Umar Media was launched a few years ago and has been disseminating the TTP-related information and videos since. -Dawn