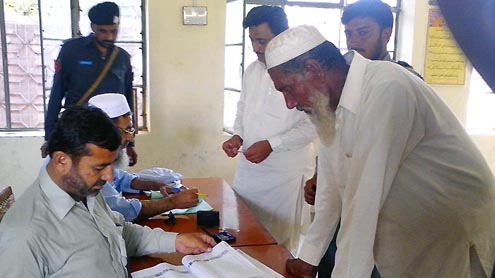 QUETTA: Polling for Balochistan’s local government elections has begun and will continue until 5 pm in the evening, DawnNews reported.

10:25 — A clash took place between two groups in Qila Abdullah as a result of which five persons sustained injuries and subsequently polling was suspended in Ward no 14.

Polling for the local bodies’ election was in full swing in the province’s Quetta, Jaffarabad, Naseerabad, Sibi, Jhal Magsi and Dera Bugti regions.

However, polling staff in parts of the province, including in Lasbela district’s Uthal and Bela areas, arrived late and hence the process began late.

In Harnai, workers of a political party staged a sit-in as polling had not begun there.

The provincial government had earlier declared Saturday as a public holiday and has made extensive security arrangements. Under Section 144, pillion riding has been banned in the province till Dec 10.

Secretary Election Commission of Pakistan (ECP) Ishtiaq Ahmed Khan had earlier said 18,000 candidates were contesting the elections in 4600 constituencies. Six million ballot papers had been sent to the 32 districts of the province. He also said 33,000 polling staff had been appointed for 5,800 polling stations.

Over 54,000 personnel of the army, Frontier Corps, Balochistan Constabulary, police and Levies Force have been deployed in and around the polling stations and at sensitive points. More than 5,000 army troops are on standby as a quick response force to deal with any untoward situation. Helicopters will be used for surveillance in sensitive areas.-Dawn