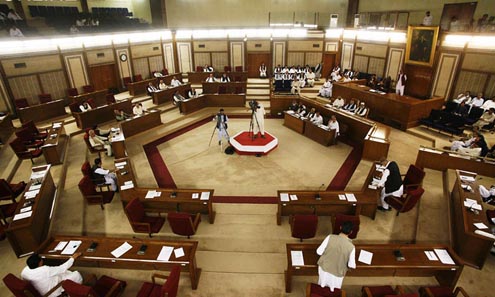 About five months after the general elections, another 11 ministers belonging to four parties are being inducted into the Balochistan cabinet.

They will be administered oath of office by Governor Muhammad Khan Achakzai on Monday. Three ministers — Senior Minister Sardar Sanaullah Zehri of PML-N, Nawab Muhammad Khan Shahwani of National Party and Abdul Rahim Ziaratwal of PkMAP – were administered oath in the first phase in June this year, but they were not allotted portfolios. Mr Jan Muhammad Buledi, spokesman for the chief minister, told Dawn on Sunday night that 11 new ministers would be inducted into the cabinet besides five advisers. There were serious differences among three coalition partners over their shares in the cabinet and portfolios which delayed completion of the cabinet.

Prime Minister Nawaz Sharif held a meeting with Chief Minister Dr Abdul Malik, Sardar Sanaullah Zehri and PkMAP chairman Mehmood Khan Achakzai in Islamabad three days ago and decided the formula of sharing ministries and allocation of portfolios. “All important portfolios will be given to three coalition partners,” sources said. The PML-N will give a ministry to PML-Q which had supported Sardar Sanaullah Zehri when name of the chief minister was being discussed. The PML-Q, which has five members in the assembly, already holds the post of deputy speaker of the provincial assembly and Mir Abdul Qadoos Bezenjo who was elected unopposed. The PML-Q has five MPAs.