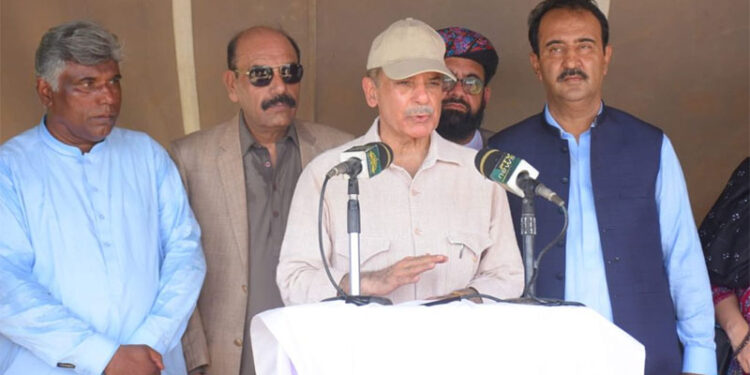 SOHBATPUR: Prime Minister Shehbaz Sharif on Wednesday directed the authorities concerned to ensure the availability of drinking water and life-saving medicines on priority in Sohbatpur’s area of Balochistan, severely damaged by floods.

The prime minister also announced a two-month waiver of water utility charges for the consumers residing in flood-affected areas all over the country.

Addressing the flood-affected people during his visit to Balochistan’s Sohbatpur, he said the government would not charge the consumers in the flood-hit areas for the bills of August and September.

PM Sharif, who arrived in the severely damaged city of Sohbatpur due to floods, reviewed the ongoing relief efforts and interacted with the locals to get their feedback.

The prime minister said the waiver on water utility charges was aimed at facilitating the people heavily burdened by the challenges in the wake of the flood.

He also announced continuation of the government’s facility in September to waive off Fuel Adjustment Charges for electricity consumers across the country on usage up to 300 units.

He said the facility would be extended beyond the flood-relief areas, benefitting around 210 million consumers in the country.

Sharif said a mechanism would be established to revive the crops of wheat and cotton in the flood-affected areas.

In view of the scarcity of drinking water in Sohbatpur, he said, two trucks carrying bottled water would reach in the area by tonight while 10 tonnes of the commodity would be available in the next two days.

He mentioned that the coalition government along with the provincial government was making utmost efforts to provide relief to the people in flood-hit areas.

Serving the masses, he said, was the noblest deed instead of indulging in politicking as done by some leaders even in the grave situation amid floods.

Earlier, the Chief Secretary Balochistan briefed the prime minister about the post-flood situation and the ongoing relief activities.

It was highlighted that the drainage of water from Sohbatpur and Dera Allah Yar would take 15 and 20 days, respectively. In four days, a 100 feet channel will be made for drinking water.

The Chief Secretary said work on 230 breaches on water canals was underway and the delay in availability of drinking water was due to the closure of inundated roads.

He mentioned that fumigation and cleaning of nullahs was in progress, while as a long-term project, a GPS-based flood alert mechanism would be made.

Other measures include two mobile maternity units, availability of life-saving and anti-venom medicines, and the arrangement of over two million mosquito nets.

The prime minister instructed the Chief Secretary to ensure the availability of drinking water and medicine on priority for the affected people.

He directed to pace up the drainage of stagnant water and complete the activity in 10 days instead of the expected fortnight.

He called for deployment of additional human resources and machinery to amplify work in view of the sufferings faced by the people.

The prime minister also emphasized necessary steps to avert the spread of water-borne and communicable diseases.