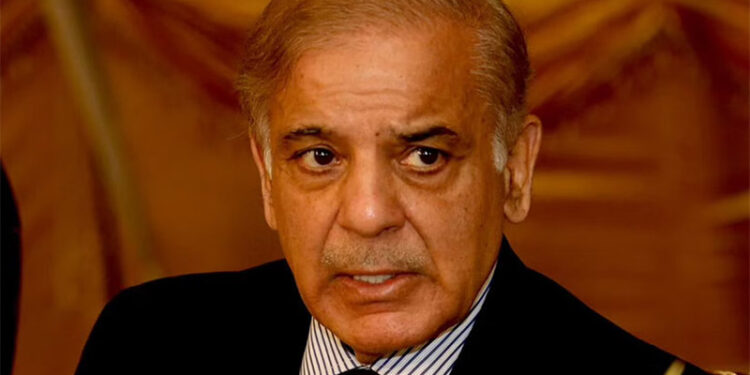 DERA ISMAIL KHAN: Prime Minister Shehbaz Sharif on Wednesday said unprecedented floods in the country had caused heavy losses to lives and infrastructure and emphasized putting in place a sustainable system to cope with the challenges of climate change.

The prime minister said trillions were required to carry out relief and rehabilitation activities in the flood-hit areas, however, vowed the entire process would be carried out in a transparent manner.

Addressing the locals and flood-affected people after reviewing the restoration work at Saggu Bridge, the prime minister said the country was grappling with an unprecedented flood situation that resulted in loss of lives, infrastructure and crops.

The prime minister said with the assistance provided by a philanthropist, the first 100 prefabricated houses having two rooms and a toilet would be built in Dera Ismail Khan to accommodate widows and orphans in the first phase.

He said the houses would be built in two weeks and he would personally visit the site to assess if the project could be replicated by the government in other parts of the country.

He recalled that during his previous visit to Tank and DI Khan after the floods, the people were in the phase of rehabilitation till the floods hit them twice.

He lauded the politicians, local administration, and armed forces for acting in unison while contributing their efforts for the rescue and rehabilitation of the affected people across the country.

The prime minister said it was the time to rise above politics and demonstrate the spirit of service and welfare for the people.

He said the coalition government raised the relief money under Benazir Income Support Programme from Rs 28 billion to Rs 70 billion for flood-affected people.

He said every affected household would be provided Rs 25,000 in a transparent way to help them mitigate their sufferings. Besides, Rs one million would be given as compensation money to the relatives of the deceased.

The prime minister outlined the damages to crops and livestock by floods which earlier used to be the means of livelihood for the locals.

He said the government had ordered the purchase of 0.2 million tents with an aim to provide shelter to the homeless.

PM Sharif lauded the efforts of Communication Minister Maulana Asad ur Rehman and Army Chief General Qamar Javed Bajwa for putting their efforts in pacing up the relief and rehabilitation activities in flood-hit areas.

He also acknowledged the donations sent by the friendly countries to help Pakistan overcome the challenges in the wake of floods.

In Swat, he regretted that violation of building hotels and resorts in the river stream resulted in damages.

He said rehabilitation of displaced persons was the upcoming big challenge following the cumbersome task of rescue.

He stressed a sustainable solution to floods in the area including the building of small dams like Tank Zam and Nawab Haider and also big dams like Gomal Zam dam.

Earlier, the prime minister was briefed about the damages incurred to people and infrastructure due to heavy floods.

The Deputy Commissioner DI Khan in his briefing said the heavy rains from August 17 to 27 wreaked havoc in the Dera Ismail Khan district with 70 percent of the population affected by the floods.

He said the hill torrents from west to east swept away a large area before falling into the Indus river and mentioned the challenges including permanent rehabilitation of people after their temporary shelter.

The National Highway Authority (NHA) official apprised the prime minister that the 600-kilometre long N-55 DI Khan-Razmak was restored in two days, while the N-35 Karakoram Highway up to Kuchal Nullah towards Kohistan was restored by Frontier Works Organization.

The prime minister also visited the Saggu Bridge which had been swept away due to flash floods. He was informed that the Sago Bridge in the first torrential wave was restored within two days, however, the work was in progress after the second hit by floods.

The prime minister also met the workers deployed on the restoration of Saggu Bridge and appreciated their hard work.

Level Up Your Style with Andre Emilio

Level Up Your Style with Andre Emilio