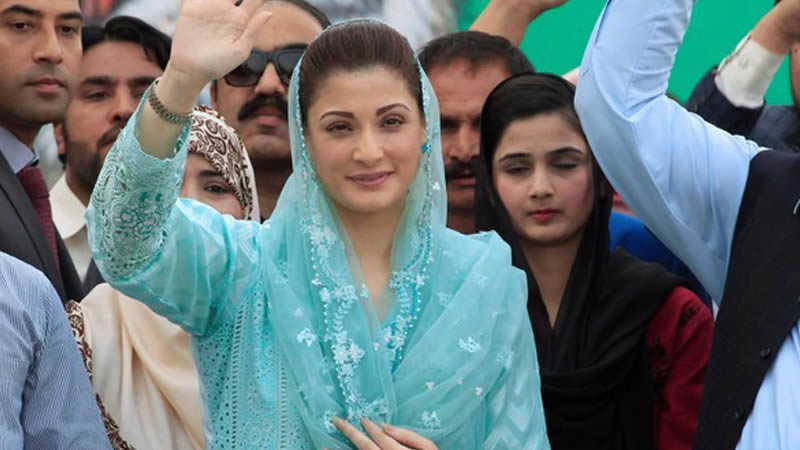 Vice President Maryam Nawaz on Tuesday said that after getting rejected from every place, former prime minister Imran Khan is finding another Saqib Nisar in the judiciary to shoot his agenda off the shoulders of the institution.

She was addressing PML-N’s social media team in Murree.

She said that the former prime minister is now dragging the judiciary after the establishment turned ‘neutral’ and demanded the institution refrain from becoming a part of his agenda.

Commenting on the KP chief minister’s statement that he would use the provincial police force in long march phase-II if Imran Khan directs so, she asked what would happen if the chief ministers of Sindh and Punjab had given similar statements.

However, the PML-N leader said no one else than the KP chief minister would give such a statement because all of them were patriotic.

She said the people of KP are sensible and preemptively recognized the ill-intentions of Imran Khan.

Maryam expressed grief on the loss of lives of PTI workers during the long march and demanded an explanation from Imran Khan why the lives of other children were put in danger in the persuasion of his own desires.

The PML-N leader said Imran Khan should call his children from London instead of using other children as a shield for gaining personal interests, adding that the former prime minister was following the path of the terrorists.

She added that the terrorists also launch attacks on Pakistan with weapons and cause conflict between the provinces.

“I want to ask the judiciary and other institutions whether a terrorist like Imran Khan would be allowed to roam freely?”

She demanded Imran Khan should remove his ‘veil of politics’ and openly express his intentions, adding that Pakistan is ready for ‘Radd-ul-Fasaad’ against him.

She reiterated that Imran Khan implored PPP co-chair Asif Zardari a night before the voting on the no-confidence motion.

Maryam said that Imran Khan first pleaded with the establishment for help and upon refusal, he started threatening them by labeling them as ‘Mir Jafar’ and ‘Mir Sadiq’.

The PML-N leader claimed that the PTI government left the national treasury empty, and they do not have the money to purchase oil for power generation which is a major cause of hours-long load-shedding across Pakistan.

Maryam Nawaz said Imran Khan could not even speak of his government’s performance even for a minute, adding that the economy was wrecked during PTI’s tenure.

The PML-N leader blamed Imran Khan for mortgaging Pakistan to International Monetary Fund (IMF), adding that the autonomy of the State Bank of Pakistan (SBP) was a part of the plot.

She said the former prime minister laid landmines for the next government that was yet to come, adding that he made the leaders of the friendly countries displeased.

On the premier’s Turkey visit, she said that PM Shehbaz is visiting Turkey to restore the relations that were tainted by the PTI government as the Turkish officials were beaten.

The PML-N leader said Imran Khan had confessed that some participants of the Azadi March were carrying weapons and added that this confession vindicated the stance of the interior minister who had said the same on basis of intelligence reports.

Maryam said that PTI should now not dare to claim its long march was political activity.