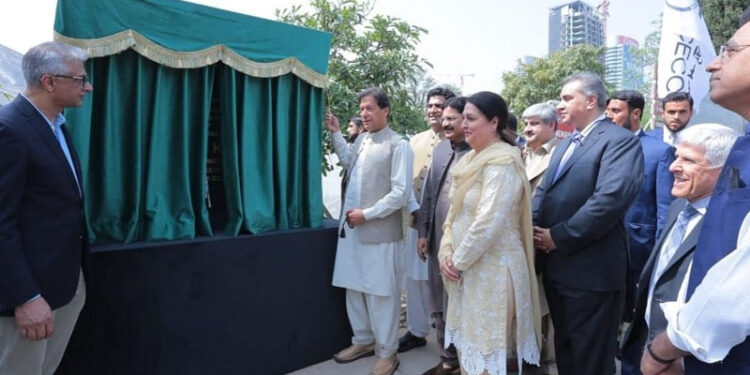 “No government in the past has ever taken steps for the welfare of common man as done by the PTI government,” he said in his address here at the groundbreaking of a new 200-bed accident and emergency center at Pakistan Institute of Medical Science (PIMS) and another 300-bed Jinnah Hospital in Sector G-11/3.

The prime minister said the provision of the best facilities for emergency patients was in line with fulfilling the requirements of humanity.

He said the quality medical facilities at PIMS and Jinnah Hospital would facilitate the growing population of the capital as per the international best practices.

He expressed satisfaction that the new setup at PIMS would supplement the existing healthcare facilities and would also aid in reducing the burgeoning load of patients in Islamabad and the suburbs.

He thanked the overseas Pakistanis to sponsor the architectural designs of the PIMS emergency section.

After 1985, he mentioned that Jinnah Hospital was the first public sector healthcare facility.

Imran Khan said the government’s national health insurance card was the best scheme in the public sector which was not even available in developed countries.

“The vision behind the creation of Pakistan was establishing an Islamic socio-welfare state. Our health insurance is a major step in this regard to enable poor people to get free medical treatment,” he said.

He termed the introduction of a uniform education system another milestone of his government that aimed at developing unity among the future generation.

The prime minister said the establishment of Rehtmatul lil Alameen Authority was a big step towards the capacity-building of the young generation in accordance with the teachings and morals of Prophet Muhammad (Peace be upon Him).

On the economy, he said all strong indicators were contributing to the financial stability of the country.

PM’s Adviser on Health Dr Faisal Sultan said the new PIMS emergency ward and Jinnah Hospital would be the state-of-the-art centres of healthcare.

He said the government had brought immense improvement in the standard of public health facilities.