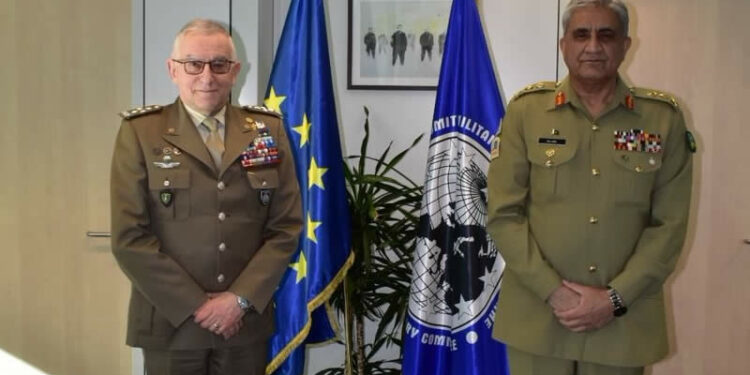 Chief of Army Staff General Qamar Javed Bajwa, who is on an official visit to Belgium, has said Pakistan valued its relations with European Union countries and earnestly looked forward to enhancing mutual cooperation based on common interest.

According to the media wing of armed forces, Inter-Services Public Relations (ISPR), during the meetings, matters of mutual interest, overall regional security situation including the current situation in Afghanistan, and bilateral relations with the EU were discussed.

European Union dignitaries appreciated Pakistan’s sincere efforts for peace and stability in the region and pledged to play their role for increased collaboration with Pakistan at all levels.

On November 28, 2021, Foreign Minister Shah Mahmood Qureshi had underscored the significance of Pakistan being a vital link between South Asia, Central, and West Asia, and Europe.

Representing Pakistan at the 13th Asia-Europe Meeting Summit (ASEM13), being hosted virtually by Cambodia from 25-26 November 2021, the foreign minister had highlighted several projects undertaken by Pakistan in cooperating with countries of the region, including China Pakistan Economic Corridor (CPEC).

He had urged ASEM members to strengthen connections between Asia and Europe in education, science and technology, trade, business, security, culture, infrastructure, and people-to-people contacts.

Youth should in no way miss the IT revolution to generate revenue, fill the trade gap: PM

Youth should in no way miss the IT revolution to generate revenue, fill the trade gap: PM