Justice Qazi Faez Isa while defending exercising the suo motu jurisdiction on the application against harassment of media persons has said that he has been targeted for no reason other than doing his duty. 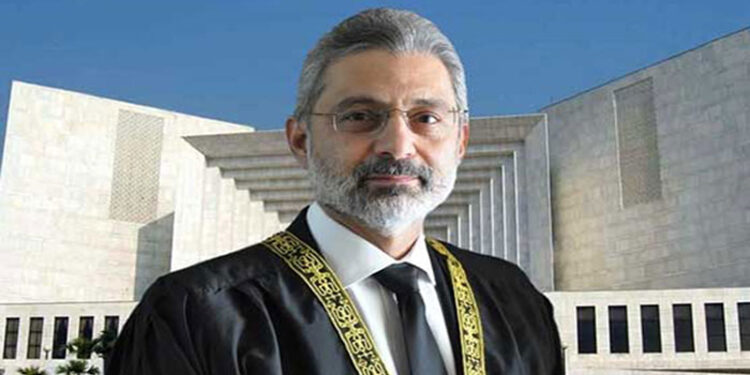 “However, a legitimate perception cannot be assuaged by platitudes when I have been targeted for no reason other than for doing my duty.”

The SC judge said that public perception cannot be gained by simply denying that a judge of the apex court “is not targeted or persecuted”.

He said that despite such treatment, he has done his utmost to maintain maximum cordiality with his colleagues.

“I never reciprocated in kind, let alone pass an order restraining any of my distinguished colleagues in like manner, I still maintain good relations with all my colleagues.

“The citizens of this country not only expect every judge to strictly abide by the Constitution and his oath of office but also to work in a congenial and amicable atmosphere, one which facilitates the dispensation of justice and to ensure maximum disposal of cases without fear or favor.”

Justice Isa said that if his distinguished colleagues had any apprehensions or misgivings, they could have discussed the matter with the members of bench-Il which had taken notice and passed the order dated August 20, 2021, but none of them did so and the registrar maintained utmost secrecy.

“Instead, the matter was immediately and publicly disclosed, and I learned of it, not through the Supreme Court, but through the press.”

Justice Isa said that if a bench of the Supreme Court starts to monitor the workings and orders passed by another bench, it would result in chaos and the collapse of the judicial system if different benches start to undo, “supplant and/or set aside the orders of other benches”.

A case cannot be monitored by another bench nor can the bench, hearing a case, be reconstituted.

Meanwhile, the superior bars have demanded of the Supreme Court to form a full court for determining the question of how suo motu jurisdiction should be invoked/entertained.

The notices have also been issued to the attorney general for Pakistan, Supreme Court Bar Association president, and Pakistan Bar Council vice-chairman for legal assistance in this regard.

The larger bench in its first order noted that the order passed by the division bench of the apex court led by Justice Qazi Faez Isa on the application against harassment of media persons, prima facie makes a departure from the norms of the applicable procedural practice.

However, Sindh High Court Bar Association President Salahuddin Ahmed told The Express Tribune that judges who are passionate about a cause (no matter how noble) do not possess enough detachment to hear it objectively.