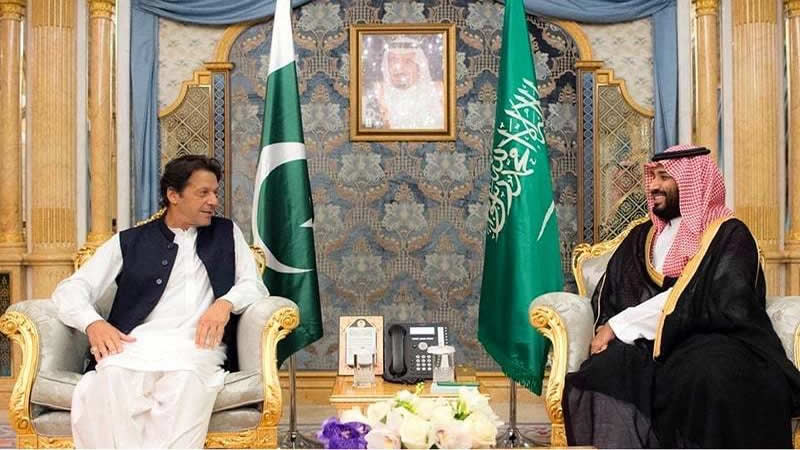 Prime Minister Imran Khan is leaving for Saudi Arabia on Friday (today) on a three-day visit (May 7-9) and a number of bilateral agreements and memorandums of understanding (MoUs) are expected to be inked between the two countries during his visit.

It is expected that the visit will serve to improve “strained” relations between Pakistan and Saudi Arabia that were shaken in the recent past due to several reasons.

According to the Prime Minister Office, Mr Khan is visiting Saudi Arabia on the invitation of Crown Prince Mohammed bin Salman who struck a conciliatory tone towards the kingdom’s arch-nemesis Iran last week, saying he sought “good” relations, after the rivals held secret talks in Baghdad. Iran welcomed Saudi Arabia’s “change of tone”.

During the visit, Prime Minister Khan will be accompanied by a delegation, including the foreign minister and other members of his cabinet.

The prime minister’s consultations with the Saudi leadership will cover all areas of bilateral cooperation, including economics, trade, investment, energy, job opportunities for Pakistani workforce and welfare of Pakistani diaspora in the kingdom. The two sides will also exchange views on regional and international issues of mutual interest.

During the visit, the prime minister will also meet Secretary General of the Organisation of Islamic Cooperation (OIC) Dr Yousef Al-Othaimeen, Secretary General of the World Muslim League Mohammad bin Abdulkarim Al-Issa and the Imams of the Two Holy Mosques in Makkah and Madina. Mr Khan will also interact with members of Pakistani diaspora in Jeddah. He will also raise the issue of Islamophobia in the West, including a recent resolution of European Parliament that called for withdrawal of GSP plus status of Pakistan.

The PMO’s press release said Pakistan and Saudi Arabia had long-standing and historic fraternal relations, rooted deep in common faith, shared history and mutual support. “The people of Pakistan hold the custodian of the Two Holy Mosques in the highest esteem. The relationship is marked by close cooperation in all fields and mutual collaboration on regional and international issues, in particular those faced by the Muslim Ummah. Saudi Arabia is a member of the OIC Contact Group on Jammu and Kashmir,” it added.

Saudi Arabia is home to more than two million Pakistanis, contributing to progress and prosperity of both countries. Regular high-level bilateral visits play a pivotal role in providing impetus to the fraternal ties and close cooperation between Pakistan and Saudi Arabia.

According to media reports, Pakistani-Saudi relations have been complex all along but since 2015, when the Pakistani parliament restricted the military from participating in the war in Yemen, its relations with Saudi Arabia have soured. Military conflict in Yemen is said to be one of the reasons behind strained relations between Saudi Arabia and Pakistan.

Last year Pakistan had expected Riyadh to support it in dealing with India over the Kashmir crisis. In particular, Pakistan had sought a supportive meeting with the Council of Foreign Ministers of the OIC. After Saudi Arabia turned down the request, Pakistan repeated its demand, which in turn resulted in Riyadh calling for repayment of $1 billion loan. Consequently, Pakistan repaid the loan while using the amount obtained under a new loan — this time from China.

Meanwhile, Prime Minister Khan has announced that the government will provide Rs25,000 funeral grant to the overseas Pakistanis to help the needy ones bury their loved ones with dignity.

In a tweet, the prime minister said: “Our govt is moving forward in service delivery for overseas Pakistanis. Funeral grant of PKR 25,000 has been approved to be given from Overseas Pakistanis Foundation.”