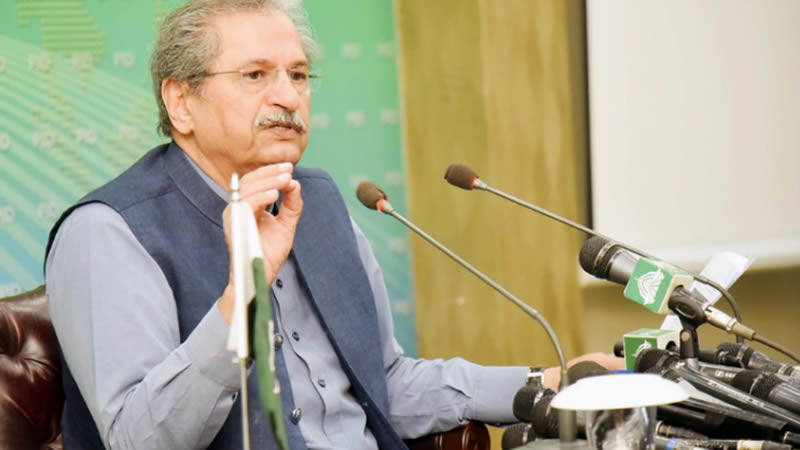 Federal Minister for Education Shafqat Mahmood on Sunday announced the resumption of academic activities for classes ninth to 12th in order to ensure preparation for the scheduled board exams nationwide, ARY NEWS reported.

Mahmood announced the decision in a presser after he chaired a meeting of health and education ministers from all provinces and regions in the country.

“The health and education ministers from four provinces, Gilgit Baltistan and Azad Jammu and Kashmir were present in the meeting,” he said.

The minister announced the resumption of academic activities in the COVID-19 affected areas for classes ninth to 12th so that the students could prepare for their examinations.

“The examinations for ninth to 12th classes will be held as per the new schedule and no exam will begin before the last week of May,” Shafqat Mahmood said adding that admissions in the universities would also be ensured keeping in view the fresh intermediate examination schedule.

He further announced that the examinations for A-Level, AS-Level, and O-level, and IGCSE would be held on the announced dates and there would be no delay or cancellation in the exam process.

“Those who are willing to appear late for Cambridge exams could appear in October and November cycle without submitting fresh fee voucher,” he said adding that Cambridge has assured that strict SOPs would be ensured during the entire examination process.

He said that the universities would switch to online academic activities in COVID-hit areas where the positivity ratio has gone beyond eight percent.

The minister further announced that the classes between one to eight would remain suspended amid rising COVID-19 cases nationwide.

The world’s most powerful passports for 2021