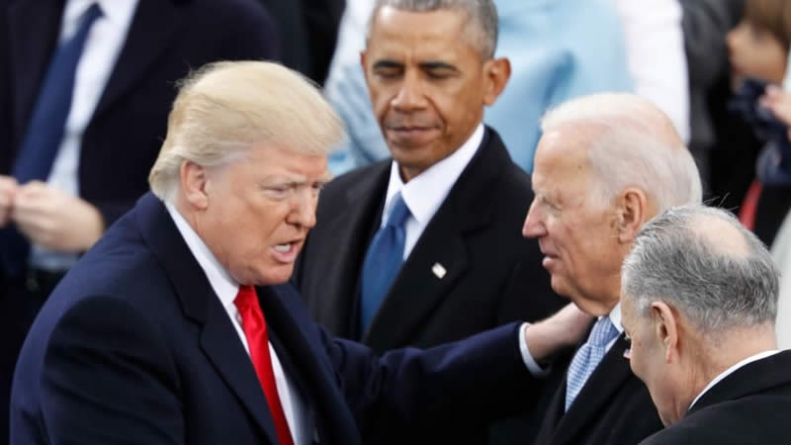 US President Donald Trump has warned his Democratic challenger Joe Biden will “demolish” the American dream if he wins the White House in November.

Speaking on the final night of the Republican convention, the president depicted his opponent as “the destroyer of American greatness”.

He said the Democrats would unleash “violent anarchists” upon US cities.

Mr Biden has a steady single-digit lead over Mr Trump with 68 days until voters return their verdict.

The end of the Republican convention heralds a 10-week sprint to election day, and the coming campaign is widely expected to be one of the ugliest in living memory.

On Thursday night, the president asked voters for another four years in office, vowing to dispel the coronavirus pandemic that has ravaged the US economy and quell civil strife ignited by police killings of African Americans.

What did President Trump say?

Mr Trump accepted his party’s renomination from the South Lawn of the White House.

“This election will decide whether we save the American dream,” he said, “or whether we allow a socialist agenda to demolish our cherished destiny.”

He added: “Your vote will decide whether we protect law-abiding Americans, or whether we give free rein to violent anarchists, agitators and criminals who threaten our citizens.”

Mr Trump’s reference to the sometimes violent racial justice protests that have swept the nation in recent months came as hundreds of Black Lives Matter demonstrators gathered outside the White House gates.

Some of their shouts and car horns could be heard on the South Lawn despite new fencing being erected this week along the White House perimeter to keep protesters at a distance.

The president said the Democrats at their party convention last week had disparaged America as a place of racial, social and economic injustice.

“So tonight,” he added, “I ask you a very simple question – how can the Democrat party ask to lead our country when it spends so much time tearing down our country?

“In the left’s backward view, they do not see America as the most free, just and exceptional nation on earth. Instead, they see a wicked nation that must be punished for its sins.”

In a blistering attack on his opponent’s decades-long political life, he continued: “Joe Biden spent his entire career outsourcing the dreams of American workers, offshoring their jobs, opening their borders and sending their sons and daughters to fight in endless foreign wars.”

While Mr Trump portrayed his challenger as “a Trojan horse for socialism”, Mr Biden’s lengthy record as a political moderate was a hindrance for him as he competed to capture his party’s nomination.

Mr Trump mentioned Mr Biden more than 40 times; the Democrat did not once name Mr Trump in his speech last week, though criticism of the president permeated Mr Biden’s remarks.

In a ponderous, hour-long speech more akin to a State of the Union address than a nomination acceptance, Donald Trump alternated between ticking through his record as president and circling around, like a prize fighter, to launch strikes on his Democratic opponent, Joe Biden.

It was a blunderbuss of attacks, of varying levels of validity, in the hope that some will draw blood – on trade, immigration, education, energy and foreign policy. But most of all, Mr Trump sought to paint Mr Biden as in league with the protesters on the streets and the more left-wing members of the Democratic party.

The setting of the speech was majestic – on the grounds of the White House and in view of the Washington monument.

The delivery from a president who thrives more on rousing rallies than rhetorical set-pieces, however, frequently landed with a thud.

How is the Biden camp responding?

Mr Biden – who was vice-president under Barack Obama – struck back on Twitter, posting: “When Donald Trump says tonight you won’t be safe in Joe Biden’s America, look around and ask yourself: How safe do you feel in Donald Trump’s America?”

Speaking by video link on Thursday night, Mr Biden said he was planning to hit the campaign trail again.

The Trump campaign has mocked him for running his White House bid during the pandemic mostly from the basement of his home in Wilmington, Delaware, citing coronavirus prevention measures.

She added: “Donald Trump has failed at the most basic and important job of a president of the United States: He failed to protect the American people, plain and simple.”

The California senator did not take questions.

Mr Biden is reportedly to win endorsements on Friday from more than 160 people who worked for former President George W Bush or for past Republican presidential candidates Mitt Romney and John McCain.
Who else spoke at the convention’s final night?

Some of the speakers sought to humanise the president, who is sometimes accused of lacking empathy.

His daughter, Ivanka Trump, a White House adviser, said: “I’ve been with my father and seen the pain in his eyes when he receives updates on the lives that have been stolen by this [coronavirus] plague.”

Ja’Ron Smith, a White House political aide who has worked on racial disparities in the criminal justice system, said the president “really cares”.

The parents of Kayla Mueller, a US hostage of the Islamic State group who was killed in Syria, lauded Mr Trump for ordering the operation, named after their daughter, that killed IS leader Abu Bakr al-Baghdadi last year.

Other speakers touted Mr Trump as a law-and-order strongman – a message hammered home during the previous three nights of the party conference.

The convention heard from the widow of a retired 77-year-old black police captain David Dorn, who was shot dead while reportedly trying to protect his friend’s pawn shop during rioting in June in St Louis, Missouri.

Ms Dorn fought back tears as she said: “Violence and destruction are not legitimate forms of protest. They do not safeguard black lives. They destroy them.”

Mr Trump’s personal attorney Rudolph Giuliani, who was mayor of New York in the 1990s, said: “These continuous riots in Democrat cities gives you a good view of the future under Biden.”