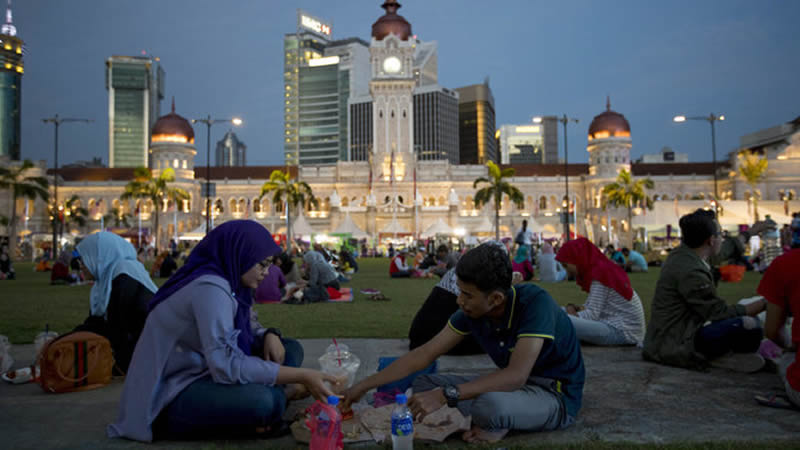 Seattle resident Maggie Mohamed was looking forward to spending the Islamic holy month of Ramazan in her native Egypt.

Now, with the spread of the new coronavirus, flying is off the table. So is having friends and relatives over for a potluck iftar, the breaking of the fast. Mohamed is older than 65 and says she cannot risk it. “It´s very sad. We were very excited,” she said. But, “I don´t take it as a punishment. I take it as a wake-up (call).”

Ramazan unites Muslims the world over in fasting and worship. This year, it follows a string of religious holidays that have also unified the faithful from different religions in grappling with how to observe familiar rituals and celebrations in a time of unfamiliarity.

Mohamed is contemplating workarounds. She always looks forward to the special Ramazan prayers, known as “taraweeh,” at the mosque. She will now pray at home with her daughter. But what about the dua, or supplication? The imam moves her to tears. As he prays for dead loved ones or those suffering in faraway lands in his “miraculous” voice, sobs rise from the faithful and intermingle with chants of “Amen” recited in unison.

Mohamed wonders: Can he make dua over Zoom video conferencing?

“That would help us a lot,” she said, even as she noted it wouldn´t be the same. At the mosque, after the tears comes the laughter. Their faces still wet with tears, female worshippers hug and chat after the prayers as children scurry around and dates and chocolate are passed from hand to hand.

“It feels like happiness,” Mohamed said. Now, “I cannot hug.” Ramazan, which starts later in April, marks when Muslims believe God first revealed the Quran to the Prophet Muhammad. The faithful abstain from food and drink from sunrise to sunset as they strive for self-purification and empathy. It´s a time for prayers, introspection and charity. Normally, it´s also a time for family, friends and festive feasting for many.

This year, uncertainty looms over the month amid indications the outbreak will cast a pall over many beloved rituals.

Many Muslims have been praying for the coronavirus cloud, which has already disrupted Islamic worship the world over, to lift before Ramazan. Mosque closures and modified calls for prayers urging the devout to pray at home have left many feeling emotional. They are relying on worship at home and online religious classes. This year, some are planning virtual interfaith iftars.

“What would make us worthy again of His sanctuaries?” he said by phone. “How do we build ourselves to where we are more connected to Him?” added Suleiman who has been streaming sermons and nightly reflections to more than 1.4 million Facebook followers. “Now we have a chance to develop empathy with those that have not had access to their religious spaces due to oppressive circumstances.” Muhammad Sajid, imam at Al-Farooq Masjid of Atlanta, said normally hundreds flock to the mosque for iftars and prayers. If coronavirus restrictions continue, “people will still fast, they will still pray,” but “definitely we will lose the spirit of togetherness.”

Malaysia, Brunei and Singapore have banned popular Ramazan bazaars where hawkers sell food and drinks in congested open-air markets or roadside stalls. In predominantly Muslim Malaysia, vendors are now planning to bring their businesses online through mobile apps or digital platforms provided by local authorities during the fasting month.

Mohamad Fadhil, a trader in Malaysia´s southern Johor state, said he was resigned to not being able to do business at the Ramazan bazaar or perform the taraweeh prayers at the mosque. “It feels odd that we can´t do all the familiar things we take for granted during Ramazan but in this time of crisis, we just have to be patient and follow orders.”

In Iran, suffering one of the world´s worst outbreaks, Supreme Leader Ayatollah Ali Khamenei suggested that mass gatherings may be barred through the holy month. “In the absence of these meetings, remember to heed your prayers and devotions in your lonesomeness,” he said. The Islamic Waqf, which administers the Al-Aqsa Mosque in Jerusalem, Islam´s third-holiest site, has closed the compound to worshippers. Ramazan prayers, which typically attract hundreds of thousands of people, are now in question, though a final decision hasn´t been made. “It´s very difficult to see Ramazan in Jerusalem without the mass prayers in Al-Aqsa,” said Sheikh Azzam Khateeb, the director general of the Waqf. Still, “the health of the worshippers comes before anything else. We pray to God that this crisis will end.”