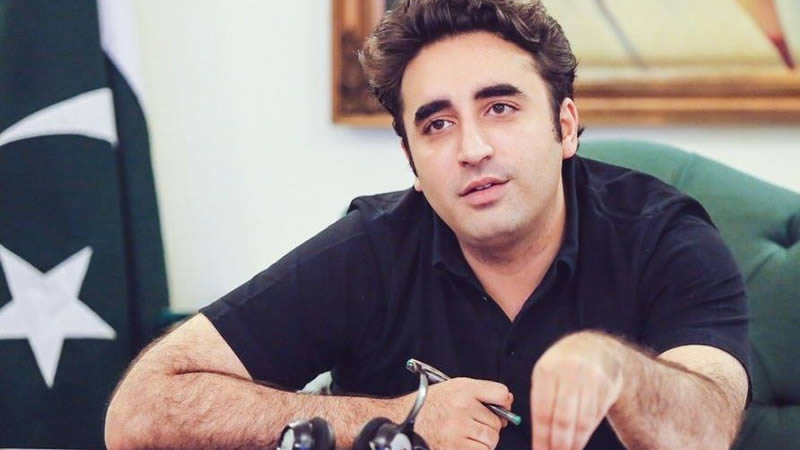 PPP Chairperson Bilawal Bhutto Zardari fears that if the federal government eases lockdown restrictions in haste, then the coronavirus infestation would spread exponentially and there would be a steep uptick in cases, which would be catastrophic for the country’s fragile healthcare system.

“If they could deal with the possible upsurge in Covid-19 cases, then they should upgrade the country’s healthcare system, so that we could prepare for that,” the young chief of Sindh’s ruling party said in an interview with anchorperson Javed Chaudhry on Express News show Kal Tak on Tuesday.

Bilawal said a national strategy is needed to tackle this gigantic challenge as a provincial government, or a city alone cannot stamp out this deadly contagion which has proliferated to almost every country and territory on the global map since its emergence in the central Chinese city of Wuhan.

He said his party wasn’t only advocating an extension in lockdown but it also wants the government to enhance capacity of all provincial governments to identify infected people, trace their contacts, and conduct more tests in order to stem the spread of this highly infectious pathogen.

“We know our healthcare system is too weak to handle such massive crisis, therefore it should be strengthened on a war footing,” he added.

To a question as to what sort of lockdown he wanted to have in the country, Bilawal said his party did not advocate a lockdown for the sake of it. “We demand that the government take all the steps which are necessary to protect the health and lives of our people.”

The PPP chairman said Pakistan should act according to the facts, reality and science and also keep in mind recommendations of the World Health Organisation (WHO). “The WHO recommends that lockdowns should continue to prevent the virus spread and should not be lifted in haste,” he added.

When asked to comment on the government’s decision to lift restrictions on the construction sector in order to provide jobs to daily wagers, Bilawal said such a decision would send out a wrong message that while the rich and powerful could stay in the safety of their houses, the poor must toil.

“We know that the coronavirus could have more devastating effect on the poor. If it spreads in the poor areas, then it could become a global crisis as the poor areas are overpopulated,” he added.

Bilawal said the construction industry is not declared an essential service in the rest of the world. He said if the government is going to give such relaxations, then it should also support the provincial governments to bolster the health infrastructure, so that they may tackle the resulting surge in infections.

Commenting on recent statements of some federal ministers against the PPP government in Sindh, he lamented that some ministers seemed to be fighting with the Sindh government instead of fighting the pandemic that he said is a global crisis.

He said he had made it clear that his party does not want to politicise the coronavirus pandemic. “When the disease had turned into a pandemic, I said we are looking to our prime minister to play a leading role during this crisis. I gave that statement and tried to follow this,” he added.

The PPP chief said the current situation demands national unity. “We want a joint strategy, a national policy. The Centre should play its role. It is its responsibility to lead the country; take all the provinces along and take those steps which could protect the lives and health of the people,” he added.

When asked to comment on the Supreme Court’s Tuesday order in the coronavirus suo motu case and its disappointment over the Sindh government measures to stem the virus, Bilawal said he believes that constitutional role of the court remains the same as it was in the days of the former chief justice.

The PPP chairman did not comment on the SC’s remarks but said he appealed to the apex court to reconsider its last week’s decision to set aside high courts and provincial governments’ orders to release under-trial prisoners and vulnerable convicts in view of the pandemic.

Bilawal cited the example of Iran where thousands of prisoners have been pardoned or temporarily released in view of the contagion and said “our court should also reconsider its decision on humanitarian grounds”.

“All prisoners in jails are not condemned to death and leaving them in prison at the mercy of the infectious disease would be like subjecting them to uncalled for suffering,” he said.

When asked why he as a leading opposition leader does not convene an all parties’ conference (APC) to forge national unity, the PPP chief said his party was the first to call an ACP on the crisis and agreed to attend consultations initiated by the National Assembly speaker.

Bilawal criticised Prime Minister Imran Khan for not trying to develop a national strategy in consultation with the opposition parties and said the premier did not even bother to call the National Assembly’s Leader of Opposition Shehbaz Sharif to forge national consensus on the issue.

“The biggest hurdle to a national consensus was the prime minister’s ego,” he said.

He also rejected the claim that the opposition was divided or that the PPP has failed to propose a plan of action to fight the pandemic. “I think the PPP has consistently presented its opinion, suggestion and policies before people and is also trying to implement it at the provincial level.

The PPP chief expressed apprehension that if the situation continued and the federal government does not take urgent steps, the number of infections in the country could exponentially increase.

He said the federal government has not taken enough measures to tackle the disease and the provinces are not provided with the support required to test and treat the people getting infected.

“We should be on war footing since the emergence of the viral disease and expand our healthcare system. But unfortunately the federal government did not take the steps that the situation demands. No provincial government can do this alone. All provinces would need the Centre’s help to deal with the crisis.

“The federal government has not given a single penny to any provincial government to bolster its healthcare system in the wake of the pandemic. We need urgent steps to increase our healthcare beds, critical care beds, protective equipment, doctors, nurses and healthcare professionals.”

When asked how much of the federal budget should be allocated for the healthcare system, he said right now when a global pandemic is raging, the country’s top most priority should be saving the lives of its citizens.

He said the provincial governments can handle their health system in normal conditions but not in this situation when the healthcare infrastructure of even the developed nations is under stress. “We [provinces] are not sovereign states and the federal government will have to come forward to support us in dealing with this extraordinary situation,” he said.

Bilawal agreed that a commission should be formed to probe into the spending of Rs8 million by the Sindh government to provide food rations to the poor but said right now our focus should be on fighting the disease.

He also quipped that once the pandemic is over inquiry commissions should also be formed to know “what had happened at Taftan border crossing [that led to spread of the virus in the country] and who allowed Tableeghi Jamaat to hold its congregation [despite the pandemic.]”