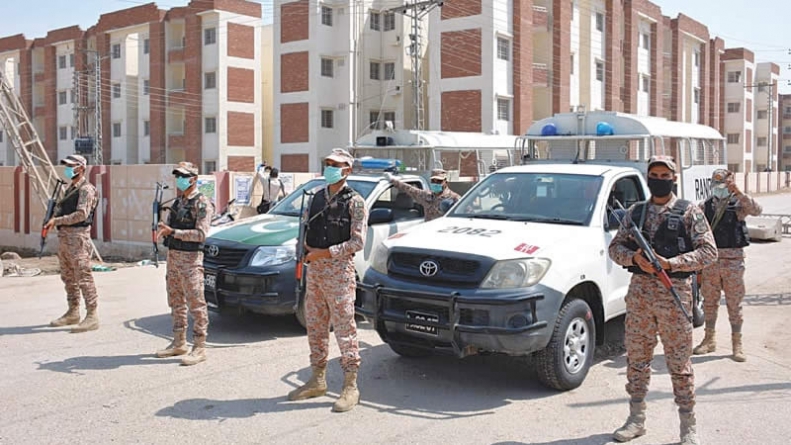 As many as 640 out of a total of 1,065 pilgrims brought to Sukkur’s quarantine centre from Taftan (Balochistan) since March 13 upon their return from Iran were cleared of coronavirus and allowed to go home on Tuesday.

The pilgrims, all Pakistani nationals, were suspected to have contracted the virus after they underwent screening. They were transported to the centre set up in Sukkur’s Labour Colony in 40 buses.

Doctors and paramedics at the centre kept them under round-the-clock observation and provided them treatment while the local administration and volunteers looked after them by providing food and other essential commodities during their stay at the quarantine centre.

The 640 pilgrims were allowed to leave the centre on Tuesday after they tested negative for the virus as a result of the treatment, the doctors said. The pilgrims were preparing to leave for their respective homes in Karachi, Matiari, Hyderabad, Larkana and other cities and towns of Sindh by buses arranged by the local administration.

‘Rest of 425 persons to remain under observation for some days’

The doctors said they had been advised to strictly follow the prescribed precautions in order to protect them from getting affected by the virus again.

They said rest of the centre’s inmates, including drivers of the buses that had brought them to Sukkur, would have to remain under observation for some more days. “They are undergoing tests every day,” Sukkur Deputy Commissioner Rana Adeel said.

Speaking to local reporters while leaving the centre, the cleared pilgrims expressed their views about the medical treatment and food provided to them at the centre as well as the attitude of doctors, paramedics and other staff towards them. Many of them appeared fully satisfied but some had complaints.

In Hyderabad, a confirmed coronavirus patient was brought to Liaquat University Hospital (LUH), city branch, from Dadu district on Monday night. She has been kept in isolation ward.

It was the second confirmed case of coronavirus reported from any part of Hyderabad division. Her husband is also under observation at the hospital and report of his tests is awaited. The woman had a travel history of Iran.

Earlier, another woman declared confirmed coronavirus patient from Qasimabad, Hyderabad, was admitted and provided treatment at the hospital until she tested negative and was discharged.

Meanwhile, a man from Latifabad has been kept in the hospital’s isolation ward. His medical examination report is awaited.

Another 17 suspected coronavirus patients had been kept in Kohsar Hospital’s quarantine. One of them with coronavirus symptoms has been admitted for observation as he had a travel history of United States and had returned from New York on March 18.

The remaining 16 were all asymptomatic and their 14-day incubation for coronavirus is going to be completed. “Their samples for tests were not obtained because they didn’t have any symptoms so far, said a hospital official.

LUH’s isolation ward comprises 17 old private rooms. Another quarantine facility is to be used in the trauma centre built over a decade back and has been lying abandoned.

In all, three major quarantine facilities in the city are ready to handle cases.

In Kotri, all wards at the Institute of Chest Diseases were vacated from patients to turn it into a quarantine centre.

Doctors, paramedics and other staff have been told to keep themselves prepared to handle coronavirus cases.

They received a briefing from the institute’s director Dr Chaman Lal. He told Dawn that TB and chest diseases patients were provided necessary medicines and sent home.

He said OPD for these patients would continue and they would be provided medicines as usual.

In Nawabshah, A 500-bed quarantine centre has been established by the district administration by acquiring vacant flats in Labour Colony. Coronavirus cases from across Shaheed Benazirabad district would be brought to the centre, it was stated.

On Tuesday, a suspected coronavirus patient who had escaped from Islamabad a day earlier was picked up by police from a train.

The man, a resident of Sanghar, was being admitted to an isolation centre in Islamabad when he slipped away on Monday.

The police brought him to the Peoples Medical University Hospital, where he was lodged in the isolation ward, where two other patients are waiting for their test results. A third one was discharged after he tested negative during observation.

In Badin’s Indus (civil) Hospital, relatives of a patient, resident of Tando Bago town, alleged that doctors discharged him despite the fact that he was suffering from flu, fever and cough and suspected to have contracted coronavirus.