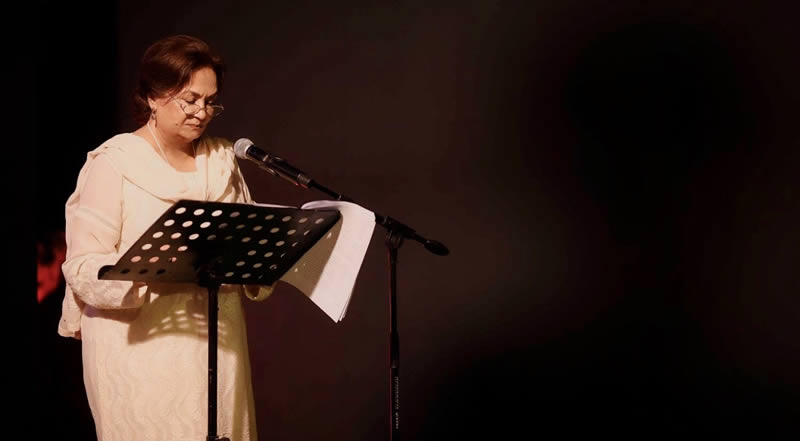 Arguing for the possibility of a ‘middle way’ for Muslims positioned between a seductive modernity and tradition through a study of Turkish and Muslim identities as represented in western and nonwestern film & TV narratives; the book examines the Turkish TV industry in detail and makes a case for the rise of a Muslim hero as a counterfoil to the prevailing dominant image of the western hero.

The book has received critical appraise with Arundhati Roy’s literary agent terming it as ‘brilliantly written’ while noted Pakistani poet and author, Harris Khalique describes it as a ‘remarkably insightful work on the emergence and growth of Turkish TV drama.’

The book launch featured an introduction to the author by former FBR Chairman Salman Siddiq who spoke about his onetime mentor at the Department of English Literature at the Punjab University with much appreciation. This was followed by a reading which gave the attendees an insight into the text’s perspective and subject matter. Well known for her perfect enunciation, dialogue delivery and expression Navid Shahzad’s reading was a treat for the audience which included former Governor Punjab, Shahid Hamid, Chairperson Alhamra Arts Council Muneeza Hashmi and her illustrious sister Saleema Hashmi, one of Pakistan’s foremost artists Ijaz ul Hassan, former Principal Aitchison College , author and well known historian Fakir Syed Ijazuddin, renowned Punjabi poetesses Sarwat Mohyuddin and Anjum Qureshi.

Academia was represented by a number of educationists such as the Directors of Lahore Grammar School, Mrs. Nighat Ali and Mrs. Sultanat Bokhari, as well as Mrs. Musarrat Salamat of Salamat School System and Dr. Taimur Rahman, Associate Professor LUMS.

The distinguished audience further comprised of well-known former beauracrats such as Syed Naseer Ahmed, while the business and health sectors were represented by the CEOs of Imperial Cinemas Syed Rahmani and Mr. Azam of Shaukat Khanum Hospital,Lahore while artist Shahnawaz Zaidi, author and educationist Mira Hashmi, actors Fawad Khan and Adeel Hashmi lent a special flavor to the evening with their presence.

About the launch of the book, Navid Shahzad said, “the event was a marvelous but humbling experience. Old friends and new came to listen, share and celebrate. In many ways, the evening was reminiscent of a Lahore that appears to be vanishing. Talking about books, music and the arts was a special feature of this magical city and this evening has inspired me to have such events on a fortnightly basis. I plan on calling it ‘The Salon Series’.”

With the prestigious Pride of Performance award bestowed upon her by the Government of Pakistan, the Fatima Jinnah Award by the Government of Punjab, gold and silver medals by Pakistan Television and the coveted Diamond Jubilee Purse awarded by the Punjab University for a first class first in MA English Literature; Navid Shahzad is an iconic television, theater and radio veteran and is one of the pioneering names associated with Pakistan Television. As an academic she taught drama and poetry as Associate Professor at the University of the Punjab for three decades before moving on as Principal of The Pakistan School of Fashion Design. She followed that up with setting up Pakistan’s first liberal arts Beaconhouse National University where she is also designated Distinguished Professor of Performing Arts.

Deeply interested in literature, media studies and music, the indefatigable Navid Shahzad has finished writing a film script and is currently working on another book while reading scripts for her next film and TV ventures.
Aslan’s Roar is available nationwide at Liberty Books, Variety Books in Lahore and Mr. Books and Saeed Book Bank in Islamabad. The paperback version will shortly make an appearance on digital platforms such as Amazon and Kindle.