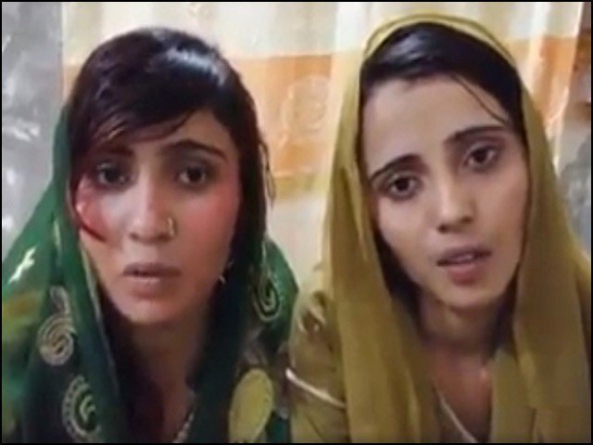 The Islamabad High Court (IHC) on Thursday permitted two reverted sisters Aasia and Nadia to reunite with their husbands, and directed secretary of the interior ministry to ensure safety for them. A high court bench led by IHC Chief Justice Athar Minallah made the decision in light of a five-member commission report in the alleged abduction, forced conversion and marriage of the girls.

On April 2, the IHC had formed a five-member commission to probe whether the girls were forcibly converted and if they were underage at the time of their marriage. The bench ordered the inquiry commission to present its report and final recommendations by May 14 and adjourned the hearing of the case. The girls and their spouses, Safdar Ali and Barkat Ali, had filed a petition seeking protection. In their plea, the girls maintained that they belong to a Hindu family of Ghotki, Sindh but converted willfully as they were impressed by Islamic teaching and “did not accept Islam under pressure or life threats.” “This is a sensitive matter and we probed it accordingly. The girls accepted Islam according to their wish and married their lovers,” Mumtaz told court.

“This does not appear to be a forced conversion case. It seems like it has become a culture in the area,” said the interior secretary. “The medical tests proved the girls are adults aged 18 and 19.” On April 2, Dr Sania from the department of Radiology of the Pakistan Institute of Medical Sciences (PIMS) prepared a report that was presented in the court, which determined that the girls were not underage at the time of marriage. The report has refuted speculations in part of the media that the girls were underage – implying that their marriages were unlawful.

Earlier, the court had ordered the state to take over custody of the girls, and they were subsequently handed over to the Deputy Commissioner (DC) Islamabad Hamza Shafqaat after they pleaded with the IHC for protection. The IHC chief justice had ordered that an SP-rank police officer who is female should be appointed on duty with the sisters to ensure their safety. Videos of the reverted sisters’ “Nikah” went viral on the social media, in which a cleric was purportedly shown soleminising the Nikah (marriage) of the two girls, triggering a nationwide outrage. They were shown embracing Islam in the video.