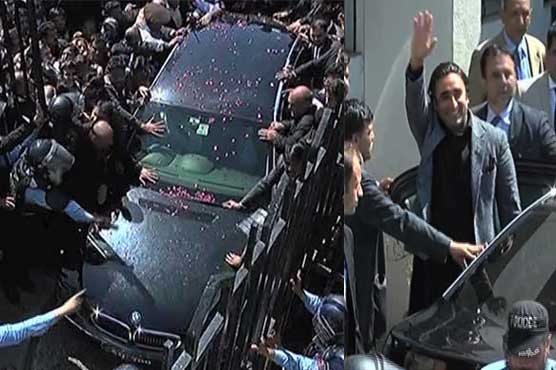 The National Accountability Bureau (NAB) on Wednesday handed over questionnaires comprising 54 questions each to Pakistan Peoples Party (PPP) co-chairman Asif Ali Zardari and his son Bilawal Bhutto Zardari in three cases including Park Lane Estate reference, and subsequently directed them to submit their response within 10 days.

The members of a joint investigation team (JIT) of the anti-graft watchdog recorded their statements after 2 hours of interrogation at the bureau’s office in Rawalpindi concerning accusations over Park Lane Estate Company (Pvt) Ltd — a Karachi-based real estate firm co-owned by Zardari and Bilawal.

Reportedly, both of them were interrogated separately by two investigation teams led by NAB DG Irfan Mangi.

Sources familiar with the matter told Dunya News that Bilawal denied his link with the case by stating that he could not comprehend why he was added to the list of persons being investigated.

However, he assured officials of cooperating in the investigation process.

He told the team that he was just one-year old when the company was established and he did not support corruption in any way. He urged officials to take into account facts concerning the matter and expressed hope that they would not be called again.

Meanwhile, Zardari adopted a cautious stance that he had become shareholder of the company in the year 2009 and the record of transactions is available.

The NAB officials will examine their statements accordingly with the relevant sections of the Law and would decide in the light of recorded statements whether to re-summon them or not. The department has maintained to proceed with the investigation process without any political influence or pressure.

After his appearance before the investigation team, Bilawal left without speaking to the media. However on his way back, his party supporters surrounded his vehicle where he addressed them.

“By using the law and constitution, we will amend the black law [of NAB]. I have been summoned in the case when I was only a year old,” he said.

“Whenever we make a speech in the National Assembly, we get a notice from a JIT (joint investigation team) or NAB or some other puppet institution,” he added while stating that they were the followers of Benazir Bhutto and were not afraid of such notices.

He demanded resignation of three ministers for having alleged links with proscribed organisations, and vowed to challenge what he called a “puppet government.” However, he did not name the ministers he was referring to.

He further said, “We will keep raising our voice against banned outfits.”

“We will keep our determination amid this political crisis,” he went on to say.

A carcade of 19 vehicles accompanied PPP leadership’s visit to the NAB. Outside NAB’s office, party workers clashed with the security personnel after the former tried to force their way inside.

Effective security measures were taken by police, and a heavy contingent of 550 officers was deployed around the bureau’s office in Rawalpindi.

SP city was given the charge of monitoring the overall security situation around the bureau. Meanwhile, police was also deployed at Nadra Chowk near Faizabad and was instructed to hinder PPP workers at Aabpara Market.