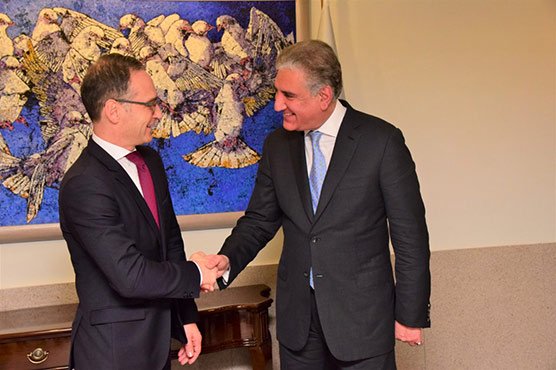 German Foreign Minister (FM) Heiko Maas on Tuesday urged Pakistan and India to reduce the simmering regional tensions by resuming dialogue and the process of negotiation.

Earlier, he arrived in Islamabad to discuss matters pertaining to regional peace and security, and the situation in Afghanistan with the Pakistani leadership.

Upon his arrival at the Nur Khan Airbase, he was warmly welcomed by the high ranking officials of the Foreign Office (FO).

He, along with his accompanying delegation, held a high-level meeting with his counterpart in Pakistan Foreign Minister Shah Mehmood Qureshi.

He lauded Pakistan’s efforts for playing a critical role in restoration of peace in Afghanistan.

His visit came amid Indian aggression against Pakistan following the Pulwama attack in Indian-occupied Kashmir (IOK).

FM Qureshi apprised him that Prime Minister Imran Khan released the captured Indian pilot Abhinandan Varthaman as a goodwill gesture towards belligerent India. He briefed the German delegation over the current regional situation in the aftermath of the Pulwama incident.

Besides, matters pertaining to bilateral relations were also discussed. He reiterated that Pakistan wants peace in the region to ensure development and prosperity.

Later, both leaders held a joint press conference during which FM Qureshi asserted that the incumbent government has been ensuring implementation of the National Action Plan in both letter and spirit.

Qureshi stressed on the significance of war against terrorism as ‘a global concern’, and maintained that “Pakistan is taking effective steps to deal with extremism in consultation with the political leadership.”

He told the media that he had apprised his German counterpart about the escalation in tensions between India and Pakistan in the aftermath of the February 14 Pulwama attack, and Pakistan’s response to Indian aggression.

Qureshi declared that Pakistan adopted certain measures to de-escalate the tensions with India, adding that the dialogue between the two neighbours is the only way forward.

“Dialogue is the only way forward. There is no military solution to the issue,” the minister remarked. He further urged the international community and the United Nations Organisation (UNO) to take notice of the ongoing human rights’ violations in Indian-occupied Kashmir (IOK).

The minister suggested negotiations to resolve the conflict including resolution of the Kashmir dispute.

Germany is part of the NATO Resolute Support mission to train Afghan security forces and has a force of about 1,200 soldiers stationed there.

Earlier in December 2018, German Ambassador to Pakistan Martin Kobler said that Germany was looking to import manpower by 2020, and in this drive of employing foreign human resources, Pakistan could prove to be an essential contributor.

The plan of action was agreed upon to provide technical and professional education to workforce in Pakistan so that they can get maximum quota in 2020 manpower import plan of Germany.

Germany showed interest in a role to increase technological skills in youth. The need to increase cooperation on federal and provincial level was emphasized during the meeting.