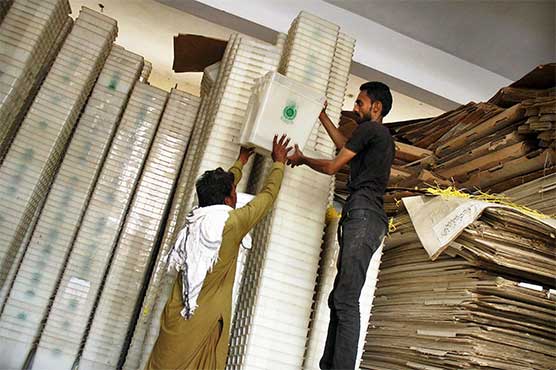 For this purpose, the election staffs have gathered at the designated places while a special sticker has also been issued to the vehicles carrying polling material. On the other hand, Election Commission of Pakistan (ECP) has completed all the preparations for the General Elections 2018 scheduled to take place in the country on Wednesday. Polling will begin at 8am and will continue till 6pm on the day. The election campaign by political parties concluded across the country on Monday midnight while those found violating the law would be imprisoned for two years or fined Rs100,000.

Over 12,570 candidates are vying for National Assembly and provincial assemblies. Against the National Assembly seats, as many as 3,675 candidates are in the electoral race whereas 8,895 for the provincial legislatures. From Sindh, 872 are contesting for the National Assembly seats and 2,382 for the provincial assembly. According to the electoral rolls, 105.96 million voters are eligible to cast the vote. In all, 85,307 polling stations and 2,41,132 polling booths have been set up across the country. Over 20,000 polling stations have been declared sensitive whereas CCTV cameras have been installed inside and outside 70 of them.