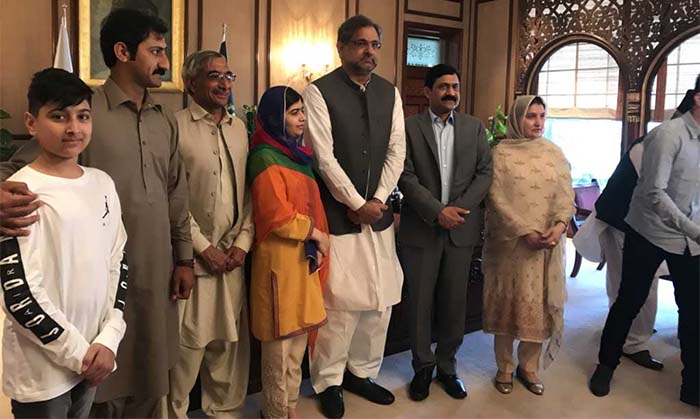 Nobel peace laureate Malala Yousafzai on Thursday said that she is extremely happy to return Pakistan after more than five years. “I cannot believe that this is the reality. I have only seen one dream in the last five years, to step foot in my homeland. It would take me some time to accept the fact that I am in Pakistan,” she said while addressing a ceremony in PM House.

“I am only 20-years-old but have seen much in my life. It was very difficult for me to leave the country after the attack. I would have never left Pakistan if it was in my control,” said Malala while breaking into tears. “I have always wanted to go Pakistan peacefully. The country’s future is the youth and we have to work for their education,” she asserted. “I am working for the education of children on international level and wanted to do the same in Pakistan,” Malala maintained. The Prime Minister also addressed the ceremony and paid rich tribute to Nobel laureate.

He expressed happiness over Malala’s return to her homeland. Terrorism has been eliminated from Pakistan. Thousands of soldiers have sacrificed in the difficult war,” said PM. “Welcome home, Malala,” he concluded. Earlier, she met Prime Minister Shahid Khaqan Abbasi at his office in Islamabad along with some other officials.