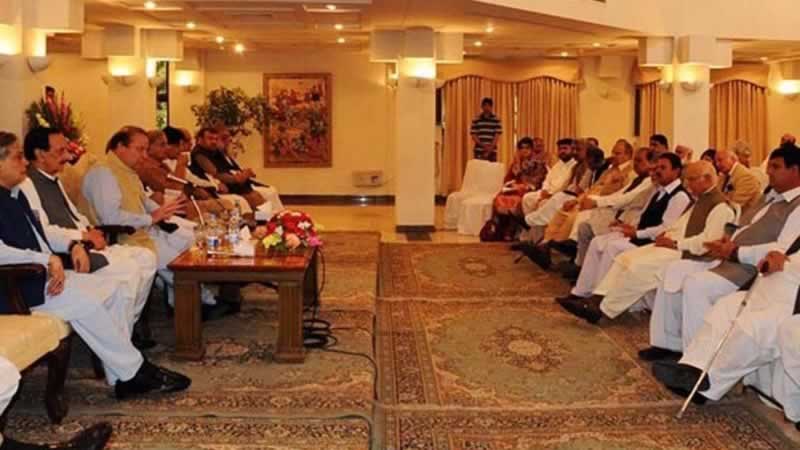 Informed sources said the meeting is to be attended by the federal lawmakers of the party where participants will devise a strategy in response to the opposition parties’ call for the premier’s resignation in wake of Panama Papers JIT’s report submission. Many of the ruling party’s legislators have expressed their confidence in the premier but some of the senior party leaders seemed dissenting with others over PM’s resignation matter. Interior Minister Chaudhry Nisar Ali Khan has remained quiet on the situation arose after the submission of JIT’s report as he persistently avoided meetings held at Prime Minister House.

Political analysts believe his silence on the matter apparently shows division in the ranks of PML-N top leadership over the issue whether Mian Nawaz Sharif should step down or remain in the office. It is to be mentioned here that Nawaz Sharif is the president of the PML-N whereas Senator Raja Zafarul Haq is the party chairman. On Thursday, chairing the federal cabinet meeting, Prime Minister Nawaz Sharif had flatly rejected the Panama JIT’s damning report against the Sharif family and termed the JIT findings a pack of ‘assumptions and allegations’.

Addressing the high-level meeting, the premier vowed to ‘expose’ the plot behind Panama Papers fiasco targeting his family. The PM said: “The language used in the JIT report has a spasm of ‘dishonesty’.” He challenged his detractors, saying if they had any proofs of corruption against him and Shahbaz Sharif then they should be brought to light. Our family has been in business since 1937, said Mr. Sharif. The JIT has charged the ruling family with perjury, having disproportionate income and living beyond their means. It said Sharif failed to satisfactorily answer most of the questions put to him during his appearance before investigators on June 15.

Following the report, the opposition parties demanded the premier to tender resignation. However, the ruling party leaders remarked they will contest the ‘concocted’ report in the Supreme Court.