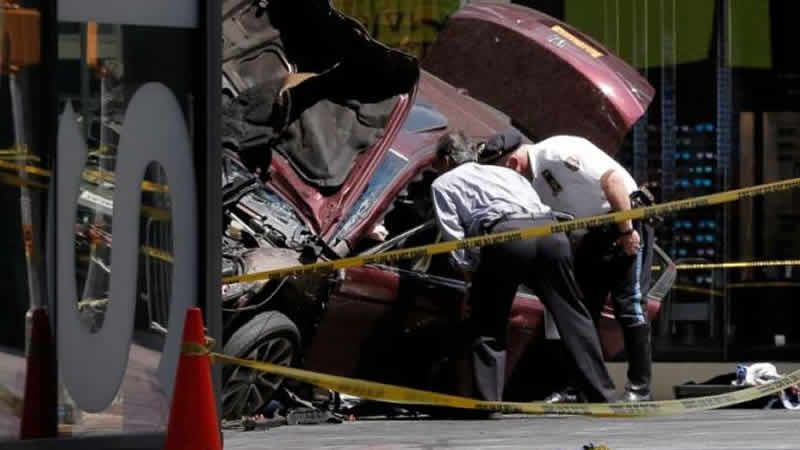 A US Navy veteran with a criminal past — but no apparent terror motive — rammed a car into a crowd of people in New York’s Times Square on Thursday, killing a young woman and injuring 22 other people.

The midday incident sparked fear in the heart of America’s most populous city after deadly car-ramming attacks in London, Berlin and the French city of Nice, but authorities said there was no evidence the crash was terror-related. Times Square, next to the famed Broadway theater district, is one of the most popular tourist attractions in the US financial capital and where police stepped up patrols in recent years after a car bomb was planted in 2010. Based on the information we have at this moment, there is no indication that this was an act of terrorism,” Mayor Bill de Blasio told a news conference at the scene. That being said, we are reinforcing key locations around the city with our anti-terror units of the NYPD so out of an abundance of caution, major sites in the city will get additional police coverage,” he added. Richard Rojas, a 26-year-old from the Bronx stopped twice in the past for drunk driving, drove his Honda onto the sidewalk at 11:55 am (1555 GMT), smashing into pedestrians for three blocks at high speed, police said.

The vehicle collided with a metal pole and came to a stop at 45th Street and Broadway, police said. The vehicle flipped onto its side, smoke and flames spewing out of the hood as the injured littered the ground. An 18-year-old woman was killed and 22 other victims were injured, including the woman’s 13-year-old sister, officials said. Four were in critical condition. Witnesses spoke of fear and panic as the car hurtled through the crowd at the start of the lunch hour as people enjoyed one of the first warm days of summer in an area typically packed with tourists and office workers. There was a maroon car just careening at high speed. It seemed like it was trying to hit everybody,” witness Annie Donahey told AFP. There were people on top of the hood that were being flown over the sides and the girl who had been walking next to me… was in a heap on the ground, and she was clearly dead, and it just happened so quickly,” she added. Rojas was arrested and will be tested for drugs and alcohol, police said. The perpetrator is in custody.

He’s a United States citizen and a former member of the armed forces with the United States Navy,” de Blasio told reporters. New York police said Rojas was arrested for driving under the influence in 2008 and 2015, and detained earlier this month for menacing. The US Navy said he served from September 2011 to May 2014, reaching the rank of electrician’s mate fireman apprentice. He was awarded the National Defense Service Medal, and had been based in Florida, Illinois and South Carolina. Broadway announced that shows would run as scheduled Thursday but urged theatergoers to allow extra time to arrive “due to an active investigation” in the Times Square area and road closures.

A pipe bomb exploded last September in New York’s Chelsea neighborhood, lightly wounding 31 people in the last terror-related incident in New York. An American of Afghan descent, Ahmad Khan Rahimi, was charged. Times Square was the scene of the most serious security alert in New since the September 11, 2001 attacks when Faisal Shahzad, a Pakistani immigrant, planted a car bomb at the intersection on May 1, 2010. His explosive device failed to detonate and he was arrested shortly after boarding a flight to the Middle East. He pleaded guilty and said he was aiming to avenge deaths from US missiles fired from drones operating over Pakistan.