Audi Launches A4 Saloon In Pakistan 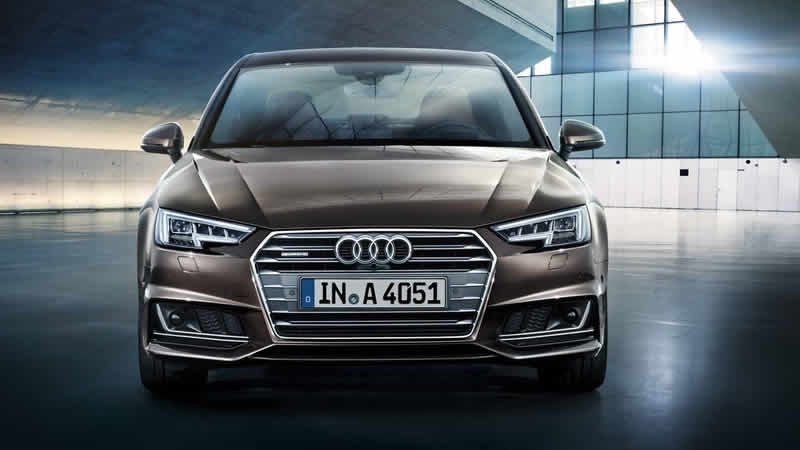 Audi launches A4 Saloon in Pakistan

Audi AG has launched the exclusive and even more powerful, efficient and intelligent Audi A4 Saloon in Pakistan.

The Audi A4 is available in black and quantum grey colours. The vehicle impresses with a path-breaking synthesis of technology and aesthetics. There are seven engines which are underline by just one principle of less fuel consumption and more power. Audi A4 S has fuel consumption reduced by up to 21 percent while power was increased by up to 25 percent as compared to the predecessor model. For example the 185 kW 2.0 TFSI engine propels the Audi A4 Sedan from zero to 100 km/h in mere 5.8 seconds and reaches a maximum speed of up to 250 km/h. The 3.0 TDI engine is available in two performance levels: 160 kW and 200 kW.

The top version Audi A4 Sedan accelerates from 0 to 100 km/h in just 5.3 seconds and continues until it reaches the limited top speed of 250 km/h. Audi A4 has a virtual cockpit with a high-resolution 12.3 inch LCD screen and the optional sound system by Bang & Olufsen with 3D sound set inspiring accents in the interior and a luxury-class standard. The optional virtual screen presents information in a comprehensive and versatile manner. The Infotainment mode is dominated by a central window while the counter and speedometer are displayed as small round elements.

The classic view focuses on the instruments. The central window with the navigation map or the telephone, radio or audio lists is correspondingly smaller here. Audi A4 S ensures safety, efficiency and an attractive design. The Audi Matrix LED headlights divide the LED high beam into many tiny light-emitting diodes which shine through three reflectors. This provides a sound experience that has never been available in cars before and the music sounds as if it was played in a concert hall. The vehicle is fully integrated as optional Audi smartphone interface brings Apple Car Play and Android Auto on board.

The phone is compatible on smartphones running iOS or Android (iOS 7.1 or higher, Android 5.0 Lollipop or higher), and show content suct as navigation, phone, music as well as selected apps such as Spotify and WhatsApp in a separate menu. The functions on the MMI system are laid out with a newly designed menu structure. The menu operation is intelligent and replaces easy-to-use logic with static menu trees reminiscent of smartphones.

The control unit switches the reflectors on and off as needed. They also provide high-precision illumination and the best possible light output without requiring a pivoting mechanism. Audi A4 sets completely new standards with the optional Bang & Olufsen sound system with 3D sound offering a sound that enables listeners to experience spatial height. This is achieved by using four additional loudspeakers, two in the dashboard and two in the A-pillars. The heart of the sound system is a 755-watt 16-channel amplifier which controls the 19 loudspeakers.

Paper Waste Management: In The World Full Of Savages Be A Saviour!

Paper Waste Management: In The World Full Of Savages Be A Saviour!